Learn more
Size750mL ProofShiraz: 107 (53.5% ABV); Cabernet: 104 (52% ABV)
Only 9,000 bottles of these limited edition single malts, which were matured for eleven years each, have ever been produced.
Notify me when this product is back in stock. 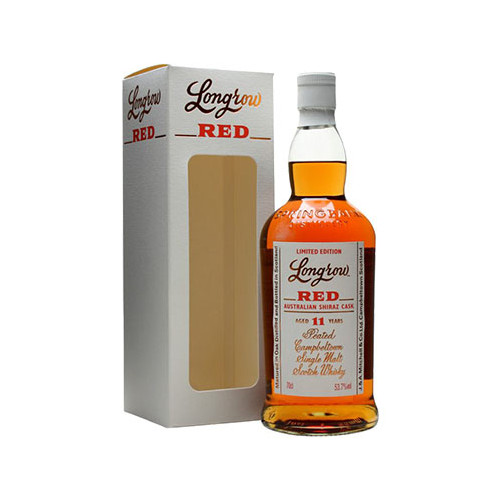 Following distillation, Longrow Red 11 Year Old Peated Single Malt Scotch Whisky Shiraz Finish is matured for six years in American oak casks that were previously used to mature bourbon. After its initial maturation, the whisky is double-barreled, or finished, for five years in ex-Shiraz barrels sourced from the Angove's Long Row Winery in Australia. The grapes used to craft the shiraz were grown on the Angove Vineyard, and were ripened in a slow and steady manner in order to produce a bright color and bold structure. Following this second maturation, Longrow Whisky is bottled at cask strength.

As a result, the whisky has an aroma of smoked cheese, oak, leather and berries. The aroma gives way to notes of summer fruits, peaches, apples and tobacco on the palate, and leads to a long, spicy finish with touches of peat and dry oak.

Longrow Red 11 Year Old Peated Single Malt Scotch Whisky Cabernet Sauvignon Finish is matured for seven years in American oak casks that were previously used to mature bourbon. After its initial maturation, it is double-barreled for four years in ex-Cabernet Sauvignon casks. Then, the whisky is bottled at cask strength.

As a result, it has an aroma of peaty smoke, red fruits, caramel, bacon and citrus. Notes of peat, raspberries, strawberries and cranberries dominate the palate, and are accented by touches of pepper, cinnamon, orange, caramel and milk chocolate. The finish is long and drying, with hints of salted crackers, peat and charred oak.

Only 9,000 bottles of these limited edition single malts have ever been produced. Pick up two today!

Shiraz: Aroma of smoked cheese, oak, leather and berries. Notes of summer fruits, peaches, apples and tobacco on the palate. Long, spicy finish with touches of peat and dry oak.