Learn more
Size750mL Proof103.6 (51.8% ABV)
Matured in port casks for 11 years, this whisky is part of Longrow’s popular “Red” series.
Notify me when this product is back in stock. 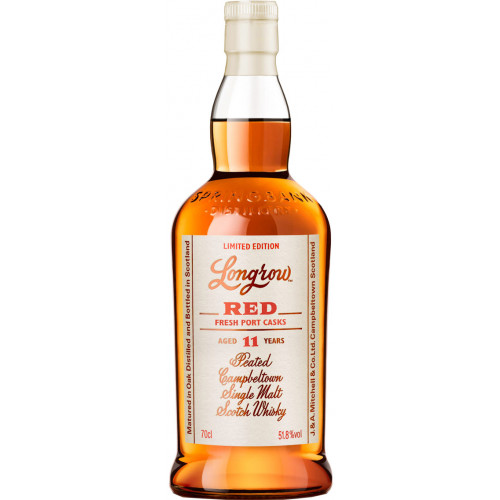 Following distillation, Longrow Red Port Finished 11 Year Old Peated Single Malt Scotch Whisky is matured for 11 years in casks that were previously used to mature port. As a result, the whisky has an aroma of French cream, summer fruits and cigars. The aroma gives way to notes of subtle peat and lingonberries on the palate, and leads to a soft, malty finish with more cream, cranberries, brie cheese and oatcakes.

Released in 2014 in limited quantities, Longrow Red Port Finished 11 Year Old Peated Single Malt Scotch Whisky is bottled at 103.6 proof. Pick up a bottle today, before it's all gone!

Aroma of French cream, summer fruits and cigars. The aroma gives way to notes of subtle peat and lingonberries on the palate, and leads to a soft, malty finish with more cream, cranberries, brie cheese and oatcakes.