Size750mL Proof102.6 (51.3% ABV)
This 13 year old Campbeltown single malt was release in 2017. Finished for 15 months in Malbec casks, the decadent wine finish imparts fruited flavors, harmoniously complementing the single malts fiery peat character.
Notify me when this product is back in stock. 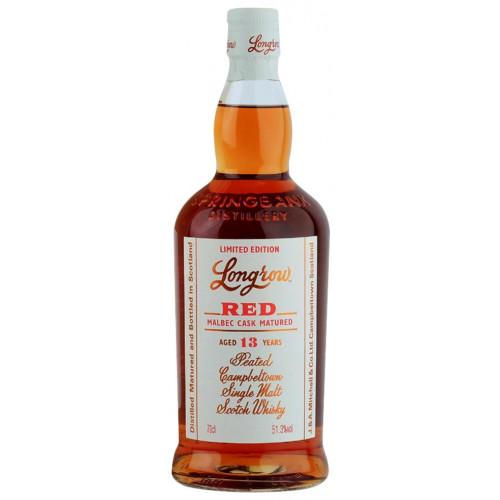 “First distilled in 1973 Longrow is a double distilled, heavily peated single malt produced in Springbank Distillery in Campbeltown. The malt is peat dried for up to 48 hours to give the whisky a unique Campbeltown-style smoky character. Less than 100 casks of Longrow are filled each year…” (producer).

This 13 year old Campbeltown single malt was released in 2017 aged initially for 12 years in bourbon barrels, before being finished for 15 months in Malbec casks. As opposed to sherry, the Malbec finish provides a delicate fruited balance to the strong peat character, producing an impeccable flavor. Barriques used for this process comes from De Toren Private Cellar in Stellenbosch, South Africa.

This is limited series limited to only 9,000 bottles all together.

The nose is smoky from the off, but also generous and soft, mixing lightly earthy, lush black fruits (cherry, cooked plum) with a lightly meaty element. Autumnal and complex. The palate is an immediate and beautifully balanced mix of fruits and smoke. The finishing cask adds layers of pomegranate molasses, cherry and fig that give depth. The finish is generous, smoky and rich.