Learn more
Size750mL Proof96 (48% ABV) *Please note that the ABV of this bottle may vary
Longmorn has a long and rich history of crafting spectacular single malt whiskies. Longmorn 23 Year Old Single Malt Scotch Whisky is aged for 23 years – the perfect age for a Longmorn.
Notify me when this product is back in stock. 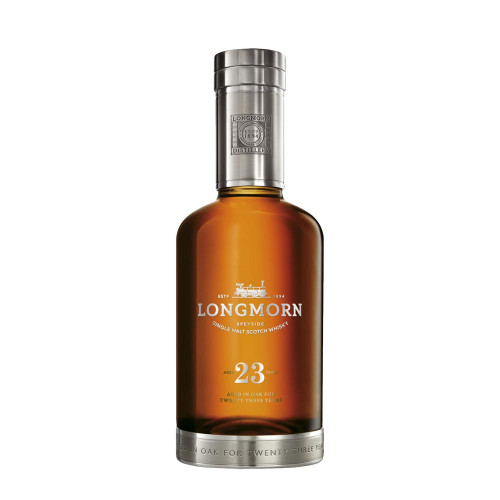 Longmorn 23 Year Old Single Malt Scotch Whisky is aged for 23 years – the perfect age for a Longmorn. This is a spectacular and rare single malt whisky that greets with aromas of Jamaican ginger cake and honeycomb on the nose which turn into fruity flavors of melon and apple on the palate. Well-rounded and balanced, the finish is eternally long, subtly peppery with just a hint of vanilla. The luxurious packaging and representation will be appreciated by any whisky aficionado.

Longmorn Single Malt Scotch Whisky is made using the finest barley that comes from the Laich of Moray, just a few miles from the distillery. The rich plains of Moray and the region's unique micro-climate are ideal for cultivating flavorful barley. The barley is then milled and mashed before being fermented for approximately two days. The wash is distilled twice through Longmorn's copper-pot stills, which are heated by a direct coal flame. This requires greater attention and skill than modern, steam-heated stills. The uneven heat produced by the coal flame also produces a more unique and textured whisky.

The nose is pleasant and complex with Jamaican ginger cake, honeycomb, toasted malt, and milk chocolate aromas. The palate is well-rounded and buttery with fruity flavors of melon and apple with a hint of chocolate. The finish is eternally long and subtly peppery with a touch of vanilla.