This product is available in: FL, WA Unfortunately, we can't ship to PO Boxes and APO addresses.

Size750mL Proof109 (54.5% ABV)
Double distilled from a rare mash bill of 100 percent rye grain, this enticing new Lock Stock and Barrel release is aged an incredible 18 years.
Notify me when this product is back in stock.

This product is available in: FL, WA Unfortunately, we can't ship to PO Boxes and APO addresses. 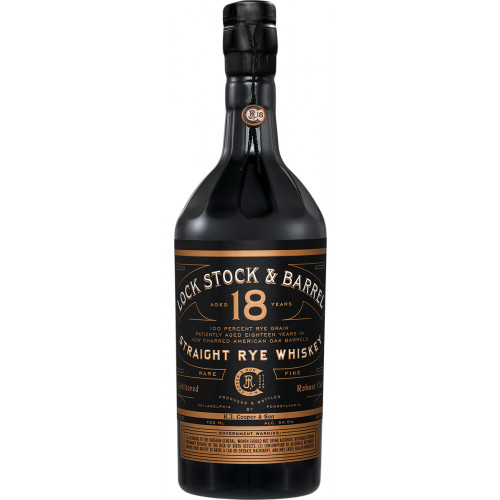 Inspired by America’s rich rye heritage, this 18-year-old follows the late great Robert Cooper’s (a third-generation distiller), Lock Stock and Barrel 16-Year-Old Straight Rye Whiskey. This unique rye was crafted using some stock he held back from Lock Stock’s 2012 release of their 12-year-old rye. One of the few who single-handedly transformed the cocktail world when he released St. Germain in 2007, Cooper passed away unexpectedly in 2016 at the age of just 39, leaving the release of incredible expression bittersweet.

This enticing new Lock Stock and Barrel release is aged an astounding 18 years. Double distilled from a rare mash bill of 100 percent rye grain, the “robust cut” is meticulously hand selected by distillers before being aged in new charred American Oak barrels in a cold climate. Its lengthy time in the barrel true harmonizes this spirit. “Lock Stock & Barrel 18-year is explosively flavorful and intense, yet perfectly balanced with notes that suggest hot, buttered gingerbread, dried peach, toasted pecan, ripe honeydew and tobacco leaf” (producer). This 100% Canadian rye whiskey is bottled at a solid 109 proof.