Learn more
Size750mL Proof107 (53.5% ABV) *Please note that the ABV of this bottle may vary
Among the oldest and most intensely flavorful straight rye whiskeys available, this whiskey was aged in cold weather for sixteen years in new charred American oak casks before being bottled unfiltered at 107 proof.
Notify me when this product is back in stock. 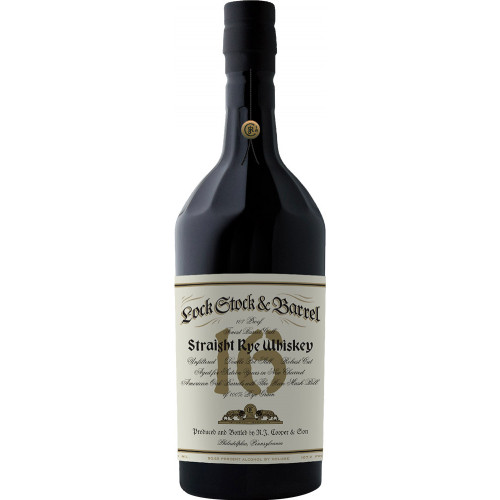 Inspired by America’s rich rye heritage, the late great Robert Cooper, a third-generation distiller, crafted Lock Stock and Barrel 16 Year Old Straight Rye Whiskey using some stock he held back from Lock Stock’s 2012 release of their 12 year old rye. One of the few who single-handedly transformed the cocktail world when he released St. Germain in 2007, Cooper passed away unexpectedly in 2016 at the age of just 39, leaving this release bittersweet.

Lock Stock & Barrel Limited Release 16 Year Old Straight Rye Whiskey is distilled from a rare 100% rye mash. The rye is grown in the Pacific Northwest, where only grains that exhibit the perfect combination of weight, plumpness and rich, earthy fragrance are harvested. After the grains have been milled and mashed, they are fermented before being double distilled through a copper pot still. Following distillation, the rye is aged in cold weather for sixteen years in new charred American oak casks before being bottled unfiltered at 107 proof.

“We tasted many barrels in our extensive collection of aged, straight rye whiskey and culled the finest that have matured to 16 years old,” said Cooper in a statement before his death. “Lock Stock & Barrel 16 is that rare but true combination of the finest whiskey and the best techniques. Winning the highest honors at the 2016 San Francisco World Spirits Competition further validates the integrity of what we put into every bottle.”

The flavors of are Lock Stock & Barrel 16 Year are somewhat more intense and concentrated than the 13-year-old’s, but with less of an oaky aroma than the age might suggest. Lock Stock & Barrel is a tightly woven fabric of aromatics including black pepper, chocolate, vanilla, and spice cake. The fruit-forward palate balances leather, oak, pinewood and needles with wild cherries, stewed blackberry, dried pear and sassafras. The fruitiness carries through the palate to the finish, where it is joined by warm notes of molasses, anise, and pepper. It blooms beautifully with a half-teaspoon of water added, though it remains flavorful and intense, yet perfectly balanced when neat.

Lock Stock & Barrel 16 Year was awarded the Double Gold Medal at the San Francisco World Spirits Competition 2016. With production limited to 3,000 cases, it likely won’t be available for long.

More intense and concentrated than the 13-year-old’s, but with less of an oaky aroma than the age might suggest. Tightly woven fabric of aromatics including black pepper, chocolate, vanilla, and spice cake. The fruit-forward palate balances leather, oak, pinewood and needles with wild cherries, stewed blackberry, dried pear and sassafras. The fruitiness carries through the palate to the finish, where it is joined by warm notes of molasses, anise, and pepper.