This product is available in: CA, DC, MN, ND, TX Unfortunately, we can't ship to PO Boxes and APO addresses.

Size750mL Proof100 (50% ABV)
This expression looks back on Prohibition times when the distillery was forced to move production to Canada. Bottled at 100 proof, the rye whiskey has spent 2 decades in a used bourbon cask.

This product is available in: CA, DC, MN, ND, TX Unfortunately, we can't ship to PO Boxes and APO addresses. 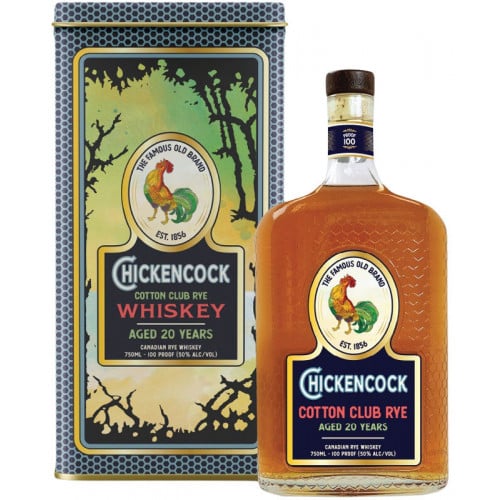 One of their core brands is The Chicken Cock label that dates all the way back to 1856 and is one of the oldest bourbon brands in history. The brand was successful in Paris, Kentucky, and its popularity peaked during Prohibition when production was moved to Canada. In the 1950s the Chicken Cock Distillery was destroyed by a fire, and in 2016, entrepreneur Matti Anttila of Grain & Spirits bought the brand and their whiskey line was revitalized in 2017.

Crafted with a mash bill of 90% rye and 10% malted barley, the Chicken Cock Cotton Club Rye has spent a full 2 decades in a used bourbon cask. When Chicken Cock was forced to move production to Canada during Prohibition, their rye was being smuggled back into the US in tin cans. This expression pays tribute to those times with a replica pre-Prohibition era tin canister. The name is a reference to the Cotton Club, a famous speakeasy that featured Chicken Cock as their house whiskey.

Get a bottle of this rye whiskey today!