Learn more
Size750mL Proof86 (43% ABV)
This incredible 21-year-old Speyside is matured in Sherry hogsheads, distilled at an unkown source.
Notify me when this product is back in stock. 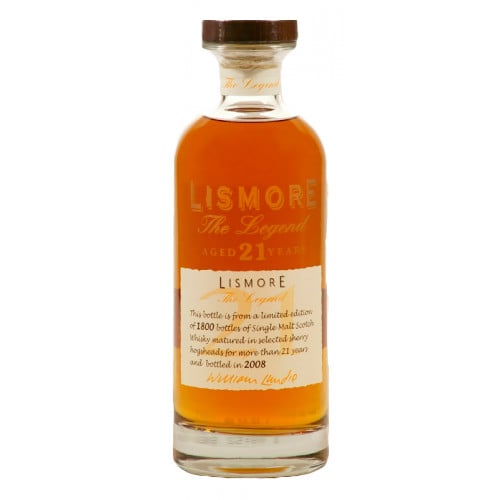 Lismore was founded by William Lundie & Co., a brand which prospered under the guidance of John and William Lundie. This range of Speyside single malts and blends was originally named after the Inner Hebridean island between Mull and the mainland.

Today Lismore is bottled by Glenfarclas owner J&G Grant using the same traditional recipes handed down by the Lundie family. Lismore currently has several releases in their range, from NAS single malts and blended Scotch to this 21-year-old single malt matured in Sherry hogsheads.

Though most information about this single malt remains undisclosed, this mysterious whisky has signature rich, complex Speyside notes of rich orchard fruit, warm baking spice, and oak. Bottled at a rather inviting 43% ABV.

Rich notes of orchard fruit, citrus, toffee, heavy dark fruits on the nose with light sweet pastry, brown sugar and oak. The palate is honeyed with caramel notes, citrus, vanilla, complex fruit, and charred oak. The finish is long and elegant with notes of toffee, citrus, and oak spice.