Size750mL Proof90 (45% ABV)
This straight bourbon is aged four years in new, American, white oak charred barrels on earthen floors in the distillery's unheated dunnage-style bonded warehouse.
Notify me when this product is back in stock. 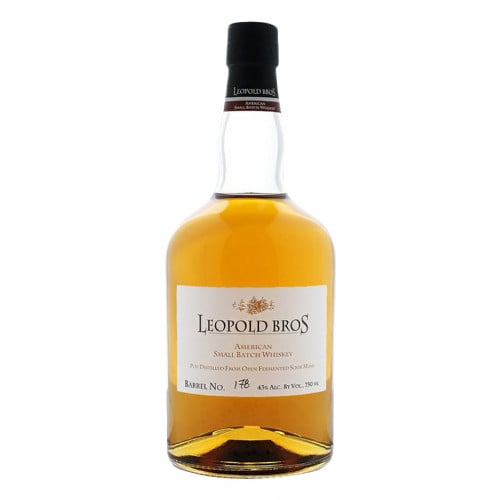 Situated in an industrial complex on the outskirts of Denver, Leopold Bros. Distillery is the brainchild of Todd Leopold. After receiving his diploma in Malting and Brewing from the Siebel Institute in Chicago, Todd moved to Germany and began working at the Doemens School of Brewers and Maltsters in Munich.

Then, he apprenticed at four different breweries and distilleries in Germany, before moving to Kentucky to study distilling. In 2008, Todd, along with his brother Scott, moved back to his parents' home in Littleton, Colorado and opened the doors to Leopold Bros. Distillery. Together, the Leopold Brothers attempt to marry chemistry with poetry — and it's working.

By proofing the whiskey prior to barreling it, Leopold is able to ensure that more of the whiskey comes into contact with the barrel, giving it smoother and more robust notes of brown sugar and molasses. Each bottle is bottled by hand with a label indicating the barrel number from which it came.