Size750mL Proof80 (40% ABV)
Inspired by a pre-World War II recipe for Southern Comfort, this whiskey is crafted from heirloom apples sourced from the Finger Lakes Region. 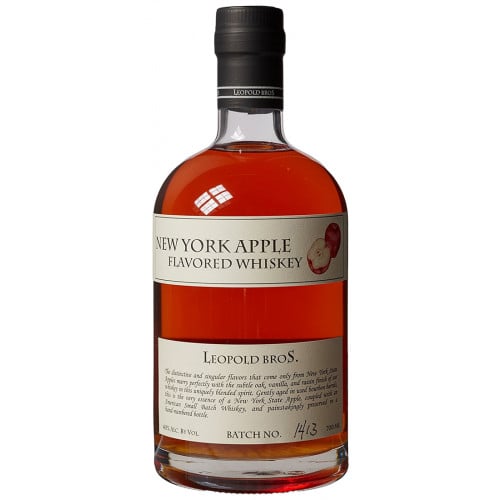 Together, the Leopold Brothers attempt to marry chemistry with poetry — and it's working. Their New York Apple Whiskey is crafted from their signature sour mash bill of corn and rye. The mash is fermented at a cooler temperature, which yields softer more subtle flavors of vanilla, pear, and raspberry. The mash is distilled in a small batch copper pot still, on grain, a method that extracts fuller and rounder flavors from the corn and rye.

The spirit is then blended with the juice of freshly harvested, hand-picked heirloom apples, sourced from the Finger Lakes region. The apples oxidize in charred American oak barrels, which impart notes of dried fruit, apricots and raisins. The spirit is naturally colored by the barrel and apple juice used; this whiskey is hand-bottled. The spirit is finished in used bourbon barrels, resulting in a tart apple, round caramel finish.