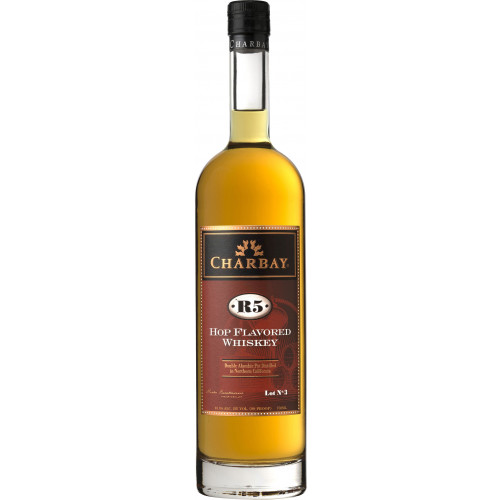 "Basically, we're an art endeavor expressed in alcohols and flavors," says Miles Karakasevic, Chabay Distillery's founder and master distiller. Thirty years ago, Karakasevic — a 12th generation Master Distiller — emigrated to California and became a pioneer in the American craft spirits movement by opening the doors to one of the first craft distilleries in the United States. Three decades later, Karakasevic continues to release some of the most unique and interesting spirits in the world.

Charbay R5 Hop Flavored Whiskey is the product of a marriage between two of California's finest institutions: Charbay Distillery and Bear Republic Brewery. The whiskey is crafted by distilling bottle-ready Racer 5 IPA (7% ABV), a craft beer brewed by the Bear Republic Brewery. Racer 5 IPA is a full-bodied beer that is made from American ale and crystal hops, and is heavily hopped (the beer includes Chinook, Cascade, Columbus, and Centennial hops).

After 6,000 gallons of the beer arrived at Charbay Distillery, the beer was distilled 24-hours a day for ten days through a 1000 gallon alambic charentais pot still, reducing the beer to just 590 gallons of Charbay R5 Whiskey. "I buy the biggest I can,"Marko says, referring to the beer he distills into whiskey. "It comes with a driver and 18 wheels."Following distillation, the whiskey was matured for approximately two years in French oak casks.

Charbay R5 Whiskey has an aroma of coffee beans, malt, and fresh hops that gives way to notes of semisweet chocolate, creamy vanilla, oak tannins and a touch of papaya on the palate. The finish is bold and strong, with a slight touch of dried citrus.

Aroma of coffee beans, malt, and fresh hops. Notes of semisweet chocolate, creamy vanilla, oak tannins and a touch of papaya on the palate. Finish is bold and strong, with a slight touch of dried citrus.