Learn more
Size750mL Proof92 (46% ABV) *Please note that the ABV of this bottle may vary
Made by the Craft Distillery of the Year, this whiskey is made with quinoa seeds sourced from Bolivia.
Notify me when this product is back in stock.

This product is available in: MO, NY Unfortunately, we can't ship to PO Boxes and APO addresses. 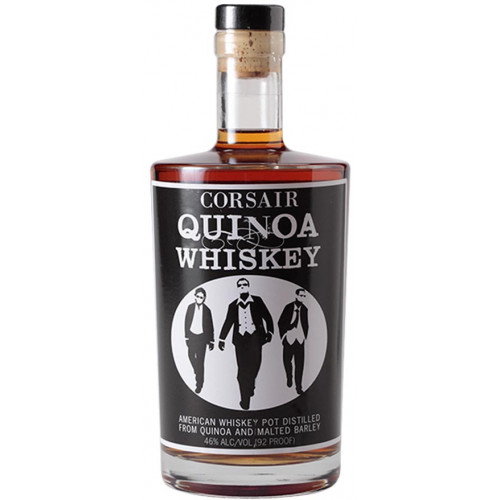 Corsair Quinoa Whiskey is made from a mash of 80% malted barley and 20% unmalted quinoa seeds. While most of the malted barley (63%) is untoasted, two-row barley, the remainder is kiln-toasted and imparts sublime notes of butter and doughy bread to the whiskey.

In addition, Bell uses red and white quinoa (pronounced "Kin-wah") seeds that he sources from Bolivia. Quinoa is a type of plant that was domesticated in South America nearly 4,000 years ago, and has high levels of protein and dietary fiber. The Incas held the quinoa crop to be sacred and referred to it as chisaya mama, or mother of all grains (the Incan emperor would traditionally sow the first seeds of the season). "The quinoa seeds add a slightly nutty flavor to the whiskey," says Bell, "and nicely balance out the flavors from the barley."

After harvesting the barley and quinoa, Bell mashes and ferments the grains before distilling them through his custom-made, 50-gallon Vendome copper-pot hybrid still. The whiskey is then aged in new, heavily charred American oak barrels (the barrels have a #4 char), before Bell's team fills and labels each bottle by hand.

Corsair Quinoa Whiskey has a nose of baked apples, cinnamon and rye that gives way to sweet notes of dried fruits, pineapple and citrus. The flavors are well-balanced with notes of buttery dough and nutty bread, and lead to a slightly spicy, long finish.

"This may be the first commercially available whiskey distilled from quinoa," says Bell.

Pick up a unique bottle of whiskey today!