Learn more
Size750mL Proof90 (45% ABV) *Please note that the ABV of this bottle may vary
Released in honor of Knob Creek creater Booker Noe, who liked pairing his bourbon with maple syrup and smoked meats, this bourbon is infused with real maple syrup. 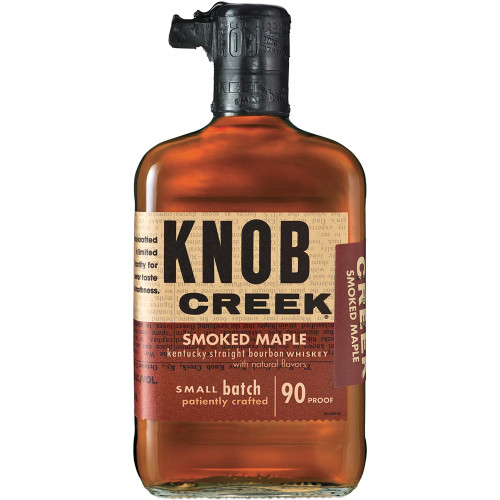 Knob Creek Bourbon takes its name from the small water source, Knob Creek, that ran through President Abraham Lincoln’s childhood farm. Booker’s vision for Knob Creek Bourbon was that of an honest, quality bourbon that could meet the standards — strength, flavor, care and patience — of bourbon made before prohibition distressed the industry just decades earlier.

Knob Creek Smoked Maple Small Batch Kentucky Straight Bourbon is the venerable brand’s first foray into a flavored line. While there are a few different maple bourbons available by different distilleries, this is the first smoked maple bourbon that we’ve come across. It was released in honor of Booker Noe, who enjoyed not only distilling some of the first small batch bourbons, but pairing them with maple syrup, and meats he smoked himself!

Like other bottles of Knob Creek, Smoked Maple Bourbon uses Kentucky limestone-filtered water, and is aged for nine years in deeply charred American white oak barrels to bring out bold flavors that harken back to the pre-Prohibition era. The maple syrup is added to the prized Knob Creek Small Batch after distillation is complete.

Though this should probably be the last taste of the day due to its smokiness, Knob Creek Small Batch Smoked Maple shines in a cocktail or as an after dinner drink, and it’s equally well suited to a plate of pancakes, sausage, and bacon if that’s more your style. No judgment here!

3.9 out of 5
(3 reviews)
Write a review
Real email address is required to social networks
Sign in
Login with Google
Login with Facebook
Or
We also recommend