Size750mL Proof80 (40% ABV)
Aged for eight years in used cognac barrels, this eau de vie has been called "an American distilling masterpiece" by Wine Enthusiast Magazine and earned five stars from F. Paul Pacult's Spirit Journal.
Notify me when this product is back in stock. 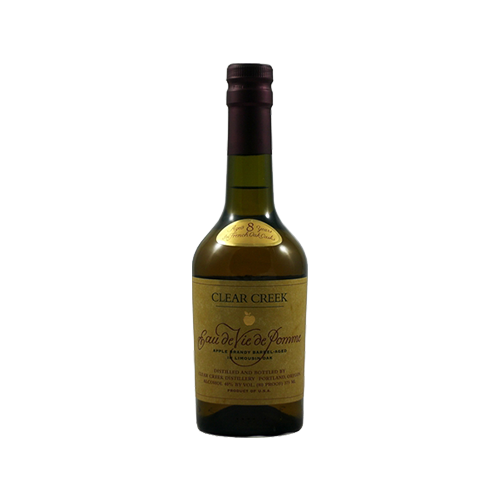 Inspired by the rich tradition of calvados, Steven McCarthy — master distiller at Clear Creek Distillery — decided to produce an American variant of calvados. Clear Creek Eau de Vie de Pomme is made from fresh, Golden Delicious apples that McCarthy and his team harvest in autumn from orchards situated on the northeast slope of Oregon's Mount Hood. The exposure to bountiful sunlight, coupled with the mineral-rich soils of Mount Hood, result in apples that are uniquely flavorful and aromatic.

After the apples have been harvested, McCarthy presses the entire apple and ferments the resulting juice before distilling it through a Holstein copper-pot still. The eau de vie is then aged for eight years — four times longer than traditional calvados — in used cognac barrels made of French Limousin oak. French Limousin oak, one of the most expensive types of wood in the world, is highly prized because it is loosely grained and porous, allowing it to impart more flavor and tannins to the liquid that it comes in contact with.

After maturation, McCarthy brings each batch of the eau de vie to proof, before filling and labeling each bottle by hand.

Clear Creek Eau de Vie de Pomme has a bold aroma of apples, which fades gently to hints of of oak, honey, vanilla and a touch of citrus. The apple flavor, while ever-present, subtly underlies the flavor of the oak. The finish, which is long and harmonious, has a touch of chocolate and apple.

Pick up an incredible bottle of eau de vie today!

Bold aroma of apples. Hints of of oak, honey, vanilla, along with a touch of citrus, subtly complemented by fresh notes of apple. The finish, which is long and harmonious, has a touch of chocolate.