Size750mL Proof92.6 (46.3% ABV)
Finished in Golzales Byass Oloroso sherry casks on the Isle of Mull, this whisky is the oldest Ledaig ever released.
Notify me when this product is back in stock. 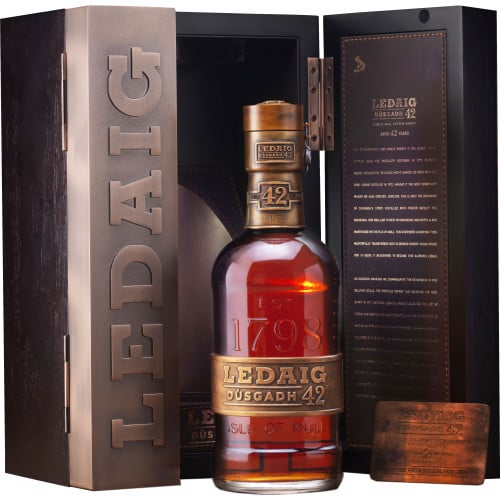 Situated along the Isle of Mull, the quaint village of Tobermory was founded in 1788 by fishermen who began using it as a resting place during their fishing expeditions in the Sound of Mull. The name Tobermory is derived from the ancient Gaelic word meaning "Mary's Well,"and refers to a nearby well on the Isle of Mull that was dedicated to the Virgin Mary centuries ago by Irish monks who lived on the island. In 1798 — just ten years after fishermen began using the port of Tobermory as a resting place — John Sinclair founded Tobermory Brewery and Distillery. Today, Tobermory Distillery is the last remaining distillery on the Isle of Mull and one of the oldest commercial distilleries in Scotland.

Ledaig Dùsgadh 42 Year Old Single Malt Scotch Whisky was aged for nearly half a century in an ex-bourbon hogshead before being sent to the Isle of Mull for finishing in a Golzales Byass Oloroso sherry cask. 100 percent un-chill filtered and bottled at 92.6 proof, only 500 bottles of this incredible whisky (Dùsgadh means “awakening” in Scots Gaelic) exist worldwide. The original copper still which Tobermory Distillery used to produce Ledaig Dùsgadh 42 Year Old Single Malt Scotch Whisky is now retired; each bottle of Dùsgadh comes with a engraved copper card that has been cut from the still, and which can be redeemed in 2024 for a bottle of the last distillate ever produced by the still (the distillate is currently resting in first-fill bourbon barrels at Tobermory Distillery).

Originally distilled in 1972, this is the oldest Ledaig spirit ever released. Pick up a rare treasure and “awaken” your senses today!

Bright chestnut color and aromas of sherry, sooty smoke, fragrant wood, toffee apple and freshly-baked biscuits. The palate is noticeably dry, with even more Oloroso sherry balanced by hints of bitter chocolate, coffee, candied cherries and ginger. The finish is long and complex, with previous flavors elevated by a subtle smokiness and honeyed character.