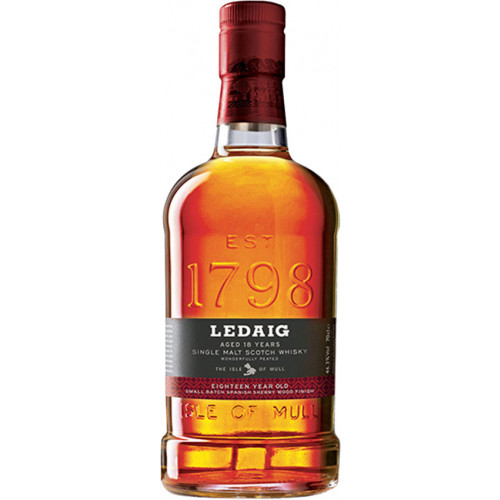 Situated along the Isle of Mull, the quaint village of Tobermory was founded in 1788 by fishermen who began using it as a resting place during their fishing expeditions in the Sound of Mull. The name Tobermory is derived from the ancient Gaelic word meaning "Mary's Well,"and refers to a nearby well on the Isle of Mull that was dedicated to the Virgin Mary centuries ago by Irish monks who lived on the island. In 1798 — just ten years after fishermen began using the port of Tobermory as a resting place — John Sinclair founded Tobermory Brewery and Distillery. Today, Tobermory Distillery is the last remaining distillery on the Isle of Mull and one of the oldest commercial distilleries in Scotland.

After distillation, Ledaig Aged 18 Years Single Malt Scotch Whisky is matured in oak barrels for nearly two decades before being finished in Spanish sherry casks, a practice not typically associated with such heavily-peated whiskies. As a result, the whisky has a bold aroma of tobacco smoke, cooked bacon and sherry wine. The palate brightens up with notes of orange zest, along heavier notes of chocolate, anise and cloves, and leads to a finish marked by smoldering coals and dark coffee.

Pick up yours today!

Bold aroma of tobacco smoke, cooked bacon and sherry wine. The palate brightens up with notes of orange zest, along heavier notes of chocolate, anise and cloves, and leads to a finish marked by smoldering coals and dark coffee.

3.4 out of 5
(2 reviews)
Write a review
Real email address is required to social networks
Sign in
Login with Google
Login with Facebook
Or
We also recommend