Size750mL Proof86 (43% ABV)
This award-winning 18-year-old single malt is matured in hand-picked oak casks that used to hold bourbon and sherry. The exquisite well-balanced profile is gentle with the peat smoke, letting the fruity sweetness shine through.
Notify me when this product is back in stock. 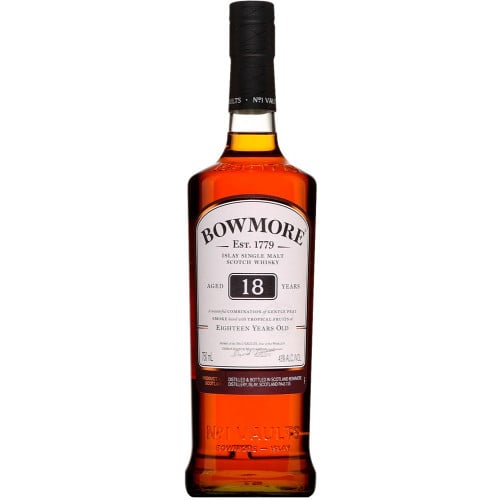 Bowmore 18 Year Old is an exquisite Islay single malt that is matured in hand-picked oak casks that used to hold bourbon and sherry. It's marvelously well-balanced with the peat smoke never overpowering the fruity sweetness and oak notes. Bottled at 86 proof, it's a limited expression that is bound to please fans of the gentler side of Islay.

The mahogany-colored whisky opens with toffee, caramel, fruit, oak, and prominent smoke aromas. The complex palate has a distinct fruity sweetness along with chocolate and gentle smoke. Finishes long and exceptionally well-balanced.