Size750mL Proof86.4 (43.2% ABV)
Produced in a historic mansion in the southwest of France, this Armagnac is crafted using the solera method. The barrel hasn't been emptied since 2001 ― each year around 10% of the liquid is drawn and the barrel is topped off with 3-year-old Armagnac.
Notify me when this product is back in stock. 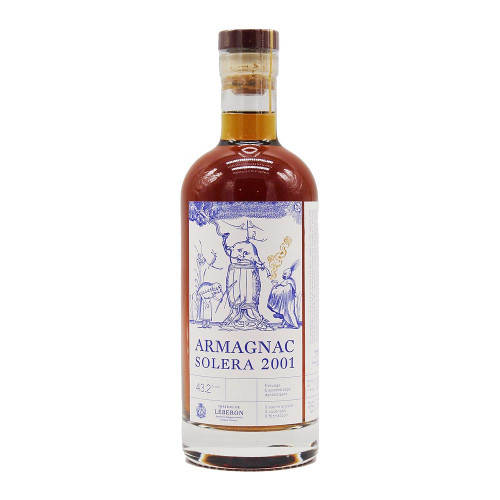 The Château de Léberon is a historic mansion in Cassaigne, France. Built in the 13th century during the Hundred Years' War, the medieval castle featured a square shape and 2 towers, a typical fortress design of that period. The fortress saw significant change during the Renaissance when several extensions were added. Its vineyards were slowly gaining reputation, but in the late 18th century, it was abandoned. In 1939 the property was purchased by Osmin Rozès and restored, becoming a family home. Now the 4th generation of Armagnac producers operates there.

The south-facing vineyards benefit from a unique microterroir. Sandy alluvial deposits make for soil with many pebbles that ensures that an unusual amount of sun reaches the grapes. The grapes themselves are extremely aromatic and plump. The 60-year-old vineyards have Ugni-Blanc and Colombard varieties that are known for their fruitiness, which results in fresh brandy that becomes very powerful Armagnac.

They distill their eaux-de-vie using a traditional continuous still, preserving the rich aromas and texture in the distillate. The aging takes place at the premises, either in new barrels or ones that used to hold brandy. The thick walls of the cellar ensure that the temperature and humidity are as constant as possible through the year, making longer maturation possible. Leberon's Armagnacs are mostly vintages that are bottled at cask strength without any additional coloring, sugar, or additives.

Leberon Armagnac Solera 2001 is produced using the solera method, meaning that they have a perpetual reserve barrel of 5,500 liters that they keep topping off ever since they adopted the technique in 2001. Each year, 500 liters are extracted and 3-year-old Armagnac is added to the same barrel.

Get your bottle of this solera armagnac today!

The aromas are rich and complex with apricot, stewed fruit, and oak. The palate has dried fruit, oak, and spice, culminating in a long finish where the notes linger and a touch of white pepper appears.