Size750mL Proof114.4 (57.2% ABV)
Gaelic for “friendship,” this limited edition special cask strength Laphroaig is smoky straight through to the finish.
Notify me when this product is back in stock. 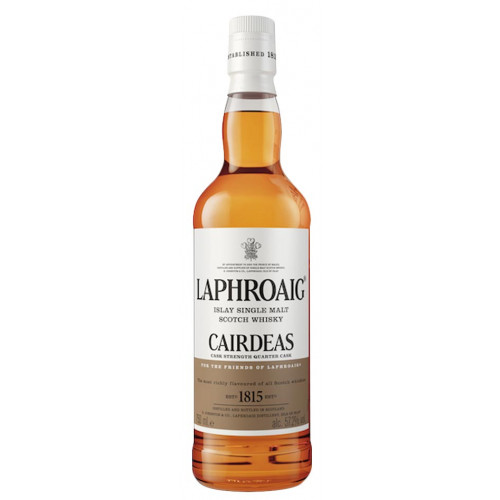 It was a fortuitous sequence of events that Laphroaig came into existence. In 1815, Donald and Alexander Johnston leased 1,000 acres of land on the island of Islay. They intended to raise and sell cattle on the land, and as a result, they began growing barley to be used as feed for their livestock. Following a particularly bountiful harvest, the brothers distilled the excess grains they had grown into whisky, and sold it to the inhabitants of the island. Soon thereafter, the brothers found it more profitable to distill whisky than to raise cattle, and Laphroaig (pronounced La-froyg) Distillery was born.

Laphroaig Single Malt Whisky is one of the most flavorful and intense whiskies made anywhere in the world. During Prohibition, it was one of the few whiskies still legally imported into the United States, as it was considered a medicinal spirit. Laphroaig Single Malt is made from the finest Scottish barley, malted at the distillery and dried over a peat flame. Unlike other distilleries which source peat from the Scottish mainland, the peat used to smoke Laphroaig barley is made from the heather, mosses, and lichens of Islay and adds a distinct iodine-like flavor to the whisky.

After the barley has been malted and peated, it is fermented before being twice-distilled through Laphroaig's copper-pot stills. The unique stills have an usually flat base and flat surfaces, which lends to the overall intensity of the whisky. After the whisky has been distilled, it is aged in seasoned oak barrels, which are re-charred prior to being filled. The re-charring process caramelizes the remaining sugars in the barrel and adds slightly sweet notes of vanilla and nutty dough to the whisky.

Laphroaig Cairdeas is an annual limited edition release featuring several different age statements, matured for more than five years in first-fill Maker’s Mark bourbon casks, followed by a secondary 6-month maturation in smaller quarter casks. The resultant spirit from 177 of the casks was bottled at cask strength. Gaelic for “friendship,” this 2017 Cairdeas is non-chill filtered and bottled at 114.4 proof.

Heavy smoke on the nose with gentle notes of coffee cream and freshly sliced vanilla pods, followed by sweet mint with notes of old hay, a background of beach bonfire and then freshly sanded wood. The palate is full-bodied and complex with sweet, dry notes of vanilla, which develops into a creamy, oily mouthfeel with bitter licorice root and a throat full of smoke. The finish is long, creamy, and smoky.