Learn more
Size750mL Proof102.8 (51.4% ABV) *Please note that the ABV of this bottle may vary
Initially matured in ex-bourbon cases, this whisky is finished in Amontillado hogsheads for one year.
Notify me when this product is back in stock. 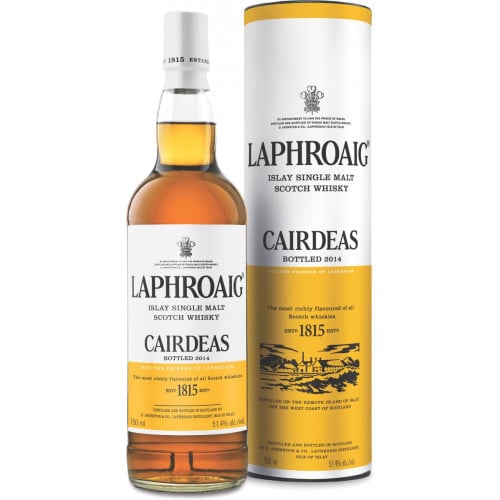 
Laphroaig Single Malt Whisky is one of the most flavorful and intense whiskies made anywhere in the world. During Prohibition, it was one of the few whiskies still legally imported into the United States, as it was considered a medicinal spirit. Laphroaig Single Malt is made from the finest Scottish barley, which is then malted at the distillery and smoked over a peat flame. Unlike other distilleries which source peat from the Scottish mainland, the peat used to smoke Laphroaig barley is made from the heather, mosses and lichens of Islay and adds a distinct iodine-like flavor to the whisky. After the barley has been malted and peated, it is fermented before being twice-distilled through Laphroaig’s copper-pot stills. The unique stills have an usually flat base and flat surfaces, which contributes to the overall intensity of the whisky.


Laphroaig Cairdeas 2014 Edition Single Malt Scotch Whisky is the newest release in the Laphroaig Cairdeas series. The single malt is initially matured in American oak casks that were previously used to mature bourbon. Following this beautyrest, the whisky is matured for an additional 12 months in Amontillado hogsheads.


As a result, the whisky has a burnt orange color, along with an aroma of cinnamon and lemon zest. Notes of figs, dates and brazil nuts dominate the palate, and lead to a complex finish accented by salty tang and licorice.


We have only a handful of bottle of Laphroaig Cairdeas. Pick one up today!