Learn more
Size750mL Proof113 (56.5% ABV) *Please note that the ABV of this bottle may vary
Distilled in 2008 and aged exclusively in refill American oak casks, this 113-proof single malt is an honest and classic 12-year-old whisky with briny, smoky, and citrusy notes. It's bottled as part of Diageo's 2021 Special Release series.
Notify me when this product is back in stock. 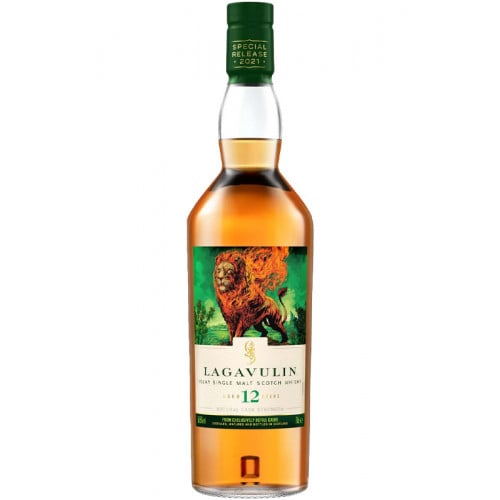 Diageo's 2021 Special Releases Collection follows the theme of hidden stories within iconic distilleries, connected via mythical creatures depicted on the bottles. Lagavulin 12 Year Old was distilled in 2008 and matured entirely in refill American oak casks for 12 years before being bottled at 113 proof. It's an honest single malt whisky and a true classic with briny, smoky, and citrusy notes.

The nose is briny with sea spray, freshly-squeezed lemon juice, and bonfire smoke. On the palate, you'll find citrus zest, seaweed, peat smoke, spice, and medicinal hints. The finish is long with lingering smoke and spice.