Learn more
Size750mL Proof92 (46% ABV) *Please note that the ABV of this bottle may vary
Aged up to 40 years, this whisky earned the Best Single Malt Scotch Trophy at the International Wine and Spirits Competition in 2013. 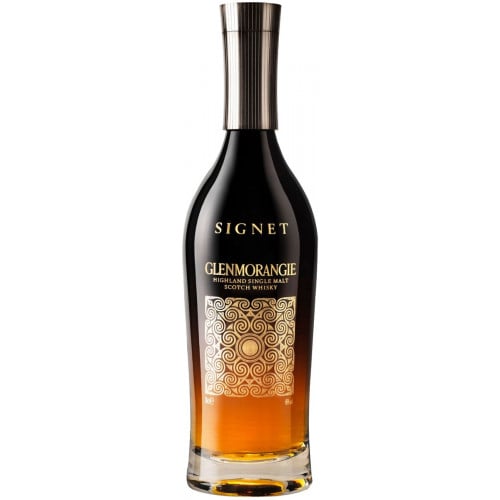 Glenmorangie Signet Single Malt Scotch Whisky is the culmination of a "lifetime" of experimentation and innovation, says Dr. Bill Lumsden, Glenmorangie's Master of Whisky Creation. While studying Biochemistry and Cell Biology as a student at Glasgow University over 30 years ago, Lumsden began experimenting with the distillation of different varieties of malted barley that were commonly used to produce beer (the barley used to produce beer is often roasted or caramelized, while the barley used to make whisky traditionally is not).

Glenmorangie Signet Single Malt Scotch Whisky is a marriage of whisky produced from two unique types of malted barley: Cadboll malted barley and malted chocolate barley (often used to create craft beers). The whisky produced from Cadboll malted barley, which is harvested on the rolling hills that surround Glenmorangie Distillery, contributes a creamy, vanilla flavor to Glenmorangie Signet. The chocolate barley, however, is "the heart of the recipe," says Lumsden. The high roasted chocolate malt "is tumble roasted in the same way coffee beans would be,"and as a result, contributes strong notes mocha, cacao beans and milk chocolate to the whisky.

Once the barley has been fermented, it is distilled twice through Glenmorangie's copper-pot stills by a team of 16 distillers known as the Sixteen Men of Tain. Glenmorangie's stills are equipped with relatively small boiler pots, which increases the exposure of the whisky to the copper, resulting in a more pure flavor. In addition, the stills are nearly seventeen feet tall — the tallest of any distillery in Scotland — and as a result, produce a lighter, more refined whisky.

Following distillation, Glenmorangie Signet is aged in a variety of different casks. While a portion of the whisky is matured in Spanish oak casks that were previously used to mature sherry, another portion is matured in new, charred oak casks. "The charred oak surface gives a very spicy, toasty style of whisky," says Lumsden. In addition, there is an "element of our oldest and rarest stocks — Glenmorangie whiskies from 35 years old through to 40 years old," he adds.

"Glenmorangie Signet is without doubt the most unusual whisky ever produced in Scotland," says Lumsden.

Pick up a unique bottle of whisky today!