Learn more
Size750mL Proof50 (25% ABV) *Please note that the ABV of this bottle may vary
This terroir shochu is produced in the town of Tano, a part of the city of Miyazaki. The 4th generation of shochu distillers crafts the distillate according to tradition, using sweet potatoes from their own farms.
Notify me when this product is back in stock. 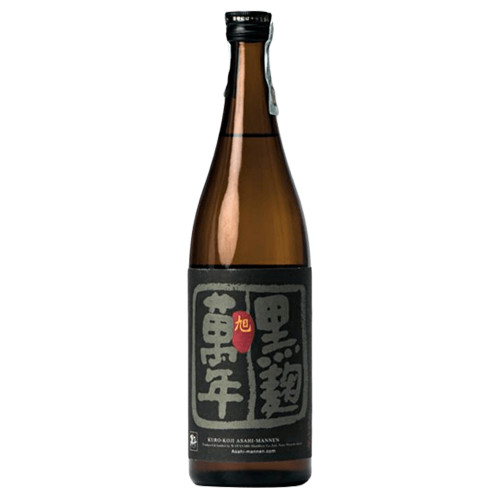 Freshly harvested sweet potatoes are steamed before letting the koji yeast, as well as naturally occurring yeast, do their magic. In an age when modern vacuum distillation is prevalent, the distillery sticks with atmospheric distillation, as dictated by tradition. This results in a richer, deeper shochu with more character. Kuro-Koji Asahi-Mannen is produced this way, making for a full-bodied and fragrant 50-proof expression where kuro (black) koji plays a large role in forming its complex flavor profile.

Grab a bottle of this traditional shochu today!

Situated in Miyazaki City, Japan, the Watanabe distillery produces shochu, the traditional Japanese distillate that is usually distilled from rice, barley, sweet potato, or a number of other ingredients. Established in 1914, the family business has more than a century of tradition and experience behind them, going back 4 generations. The distillery was founded by Sugaichi Watanabe. After working in the forestry business in the US, he returned home to Japan, found a distillery for sale, and decided to switch professions. The original distillery burnt down in 1919 but was rebuilt soon after.

Today, the distillery is run by brothers Koichiro and Junya Watanabe. They use ingredients from the Miyazaki Prefecture, including sweet potatoes from their family farms. The distillery lies in the agricultural town of Tano, a part of the city of Miyazaki, on Kyushu island, where the warm climate benefits the production of shochu. Pristine mountain water is drawn from beneath the distillery, and white and black Kawauchi Genichiro Shoten koji yeast is used to ferment the sweet potatoes.
Explore all Asahi-Mannen bottles >>

The nose of this shochu opens with baked sweet potato and earthy notes. The palate has more sweet potato, a distinct nuttiness, and mineral undertones. The finish is rich with a touch of spice and nutmeg.