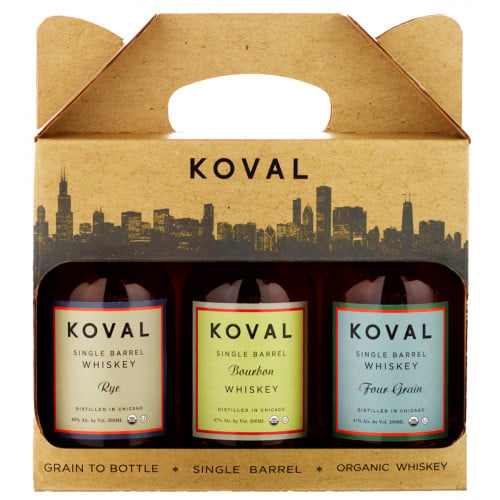 Koval Distillery, which is situated just a few feet away from Hollywood Beach in Chicago's North End, boasts a custom-made, 2,000 gallon, Kothe Destillationstechnik copper-pot still imported from Germany. A bespoke still equipped with an elongated whiskey helmet and a unique bubble cap design. ”I come from a family that's been distilling for over a hundred years in Austria," explains Robert, who has been distilling spirits himself since he was a child. "My grandfather had a distillery in Austria and I would help him to make different eau de vies and brandies when I was growing up. He taught me the importance of having the right equipment and using fresh, organic ingredients.”

Koval distillery is a grain-to-bottle operation, sourcing their grains from a local organic farmer collective in the Midwest. The grain is milled and mashed on-site, and only the heart cut makes it into the bottle. All enzymes and yeast used in production are non-GMO, and the water is sourced from Lake Michigan, purified using a natural charcoal method. The heart distillate of their whiskey is aged in bespoke charred American oak casks sourced from a cooperage in Minnesota, for 2-4 years. Each bottle is filled from a single barrel, before being labeled by hand, onsite.

Koval Rye Whiskey is made from 100% organic rye grains. With its aromas and flavors of rye, cinnamon and baking spices, the Wall Street Journal said, ”This is no ordinary rye.” Koval Four Grain Whiskey has a nose of banana and dried, tropical fruits, which is followed by notes of oak, buttery bread, and a spicy finish. Koval Four Grain won a Gold Medal at the International Whisky Competition in the "American Whisky" category. Koval Bourbon is made from only organic corn and millet. One of the major grains of Asia and Africa, it has aromas and flavors of mango, vanilla, apricot, pepper, clove, and caramel.

Koval Four Grain won a Gold Medal at the International Whisky Competition in the "American Whisky" category. Koval Bourbon is made from only organic corn and millet. One of the major grains of Asia and Africa, it has aromas and flavors of mango, vanilla, apricot, pepper, clove, and caramel.

Get your gift pack today!

3.4 out of 5
(3 reviews)
Write a review
Real email address is required to social networks
Sign in
Login with Google
Login with Facebook
Or
We also recommend