Size750mL Proof94 (47% ABV)
Aged in heavily charred casks from Minnesota, this bourbon is made from a mash of corn and millet. 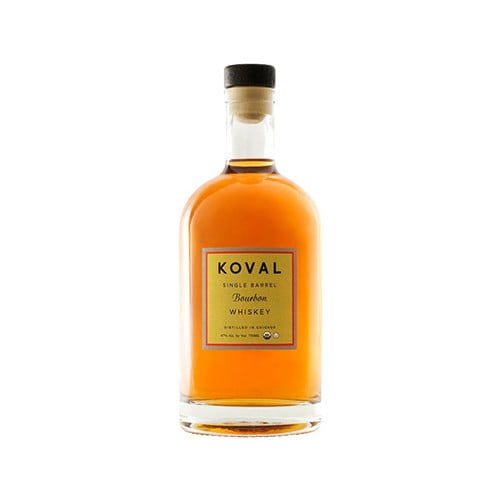 Koval Distillery, which is situated just a few feet away from Hollywood Beach in Chicago's North End, is dominated by a custom-made, 2,000 gallon, Kothe Destillationstechnik copper-pot still imported from Germany. "I come from a family that's been distilling for over a hundred years in Austria,"explains Robert, who has been distilling spirits himself since he was a child. "My grandfather had a distillery in Austria and I would help him to make different eau de vies and brandies when I was growing up. He taught me the importance of having the right equipment and using fresh, organic ingredients."

Like all bourbons, Koval Single Barrel Bourbon Whiskey is made mostly from corn. While most bourbon mashbills typically contain wheat or rye as secondary grains, Koval Bourbon is made from only organic corn and millet. Millet, one of the major grains of Asia and Africa, is gluten-free, and has a long history in Asian spirits. The Birneckers source their corn and millet from a farmers' co-op in the Midwest. After the grains arrive at the distillery, Robert mashes and ferments them, before distilling them through his custom-made, copper-pot still. The still is equipped with an elongated whiskey helmet and a unique bubblecap design, which provide for greater surface area for the bourbon to develop its aromas and flavors of mango, vanilla and apricot.

Following distillation, Robert removes the heads and tails of the distillate and matures the hearts in new, charred American oak casks that are made by a bespoke cooperage in Minnesota. The casks lend flavors of pepper, clove and caramel to the bourbon.

Once the bourbon has matured for 2-4 years, each bottle is filled from an unfiltered single barrel, before being labeled by hand.

"When we got started, we noticed that there was a real vacuum regarding distilling knowledge in the United States," says Robert, "If the majority of product being put out is good, it helps the entire industry. If somebody tries a crappy product that's labeled craft' from somebody else, they're less likely to try our product. It's important to us that the whole industry grows with us. We don't want it to be a one-hit wonder, something that everyone rushes to and then it kind of dies down again."

Koval, which is a Yiddish term meaning blacksmith, is often used colloquially to refer to the blacksheep of the family.

Pick up a bottle of Koval Single Barrel Bourbon today!