Learn more
Size750mL Proof100 (50% ABV) *Please note that the ABV of this bottle may vary
This limited-edition 15-year-old Knob Creek Kentucky straight whiskey follows in the wake of extremely well-received expressions such as the 2001 Limited Edition. Expect a wonderful balance of caramel, oak, and gentle sweetness.
Notify me when this product is back in stock.

This product is available in: DC, NV, NY, TN Unfortunately, we can't ship to PO Boxes and APO addresses. 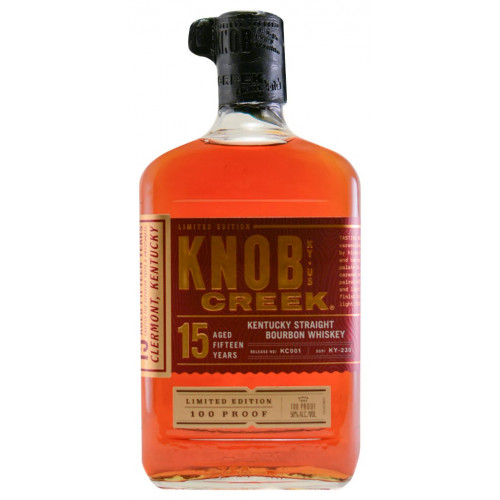 Following the end of the American Revolutionary War, Johannes Reginald Beam emigrated from Germany to the United States and eventually settled in Kentucky County. At the time, Kentucky County was still considered part of Virginia, and was overseen by a military governor named John J. Bowman. After settling in Kentucky, Beam began harvesting corn and set forth a family tradition by distilling the excess grains he harvested into whiskey. Since then, seven generations of the Beam family have been involved in whiskey production for the eponymous company (the company is actually named after James Beam, who rescued it following Prohibition).

Knob Creek Bourbon was created by Beam’s grandson, Booker Noe, who after joining the family business in 1950 was promoted to Master Distiller just ten years later. Booker talked like a true Kentuckian and was known for his contagious personality, and through his launch of the "Small Batch Bourbon Collection" — the collection includes Knob Creek as well as Basil Hayden’s, Booker’s and Baker’s bourbons — he is often credited as the father of the small-batch bourbon movement.

Knob Creek 15YO is a limited-edition expression that follows in the wake of editions such as 2001 Limited Edition. It's a small-batch Kentucky straight whiskey with aromas of caramel, oak, vanilla, baking spices, and a gentle sweetness. There's caramel, toffee, oak, and leather on the palate. Finishes warming with lingering spice, floral, and fruity notes. Knob Creek's limited editions are immensely popular, so it's best to get one quickly before they sell out.