Size750mL Proof131 (65.5% ABV)
This ultra-premium rum is distilled from "Blackstrap Molasses" made from hand-harvested sugarcane sourced just south of the distillery in Santiago de Los Caballeros.
Notify me when this product is back in stock. 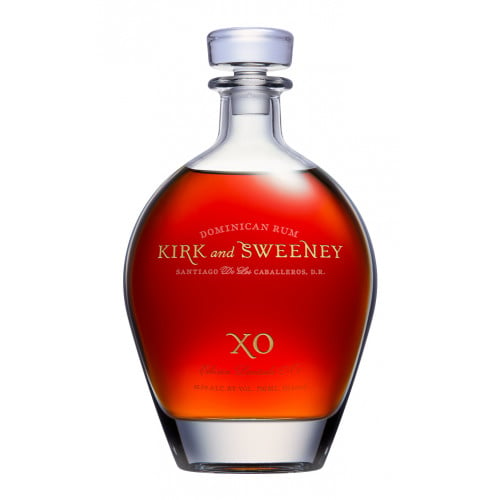 "Kirk and Sweeney was the name of a wooden schooner that was best known for smuggling rum from the Caribbean to the United States during Prohibition," says August Sebastiani, President of 35 Maple Street Distillery. Just before it entered the territorial waters of the United States, the schooner would drop anchor and sell the rum to smaller boats which would come up alongside the Kirk and Sweeney. The smaller boats, which were faster and more maneuverable than the boats in the Coast Guard's fleet, would smuggle the rum ashore.

The process begins with quality "Blackstrap Molasses" which is the byproduct of hand-harvested sugarcane sourced just south of the distillery. The liquid is carefully fermented, distilled and aged in American oak barrels in the Dominican Republic. The presentation is inspired by an old captain’s reserve cigar box, enclosed in a rich mahogany-styled gift box and opens just as a treasure chest might. Bottled in ultra-premium handmade crystal glass inspired by the traditional bottles that were used during the early 20th century.

Layers of dried fruits and oak with subtle hints of caramel and toffee on the nose. Toasted oak and vanilla with hints of raisin and sherry on the palate followed by layers of spice and sweet dried fruits. The finish is lingering, warm and robust finish through the end.