Size750mL Proof96 (48% ABV)
Foursquare Sagacity is a single blended rum, made of two molasses-based rums, aged for 12 years in ex-Bourbon and ex-Madeira barrels, and bottled at 48% ABV. Winner of a Double Gold in the 2020 International Spirits Challenge, this expression is a fine example of a premium Barbados rum.
Notify me when this product is back in stock. 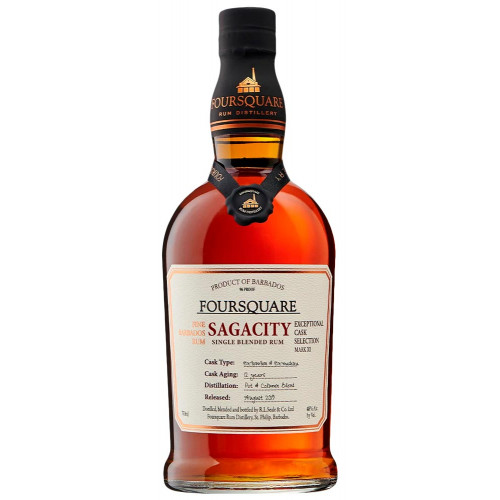 The Foursquare Rum Distillery was opened in 1996 on a former sugar plantation on the Caribbean island of Barbados by R. L. Seale & Company Limited, which was established in 1926 by Reginald Leon Seale. The distilling operations are now run by his great grandson Richard Seale, who joined the family business in 1993 and has been working tirelessly on bringing innovation to the 300-year-old process of fermentation and distillation of sugar cane by-products.

The Caribbean is the birthplace of the modern rum, and Barbados produces some of the finest rums in the world. When building the Foursquare distillery in mid-1990s, Richard asked the best engineers to help develop his new ideas, and they designed a modern, computerized distillery. While insisting on producing traditionally distilled pure rum with passion and a no-nonsense approach, Richard does not shy away from upgrading tradition with modern methods. On his mission to earn rum the place it deserves, he has also pushed for a geographical indication (GI) for Barbados rum. He was described as a questioning, opinionated Barbadian, who is leading rum into the 21st century by the spirits expert Dave Broom. The Foursquare Rum Distillery found its niche in creating high-end rums, and Richard's quest to make world's best rums has earned the distillery several consecutive Rum Producer of the Year titles in prestigious international competitions such as the International Spirits Challenge.

Foursquare Sagacity is part of the distillery’s popular Exceptional Cask Selection series. It is a blend of two 12-year single blended molasses-based rums (pot and column distilled), one aged entirely in ex-Bourbon barrels, and the other in ex-Madeira barrels. It is bottled at 48% ABV (96 proof), without adding color, sugar or other additives, and without filtration. This expression was awarded a Double Gold in the 2020 International Spirits Challenge.

The nose is fruity, with strong notes of vanilla. The zingy palate carries the aromas of citrus peel, ginger and oak. The finish is long and oaky.