Caskers Rewards members earn up to 4 store points back when buying this bottle.
Size750mL Proof100 (50% ABV)
Kilchoman STR Cask Matured is a single malt from the Scottish Island of Islay. STR stands for shaved, toasted and re-charred, a process of preparing the casks created by late Dr Jim Swan, a whisky consultant who was described as ‘the Einstein of whisky’.
Notify me when this product is back in stock. 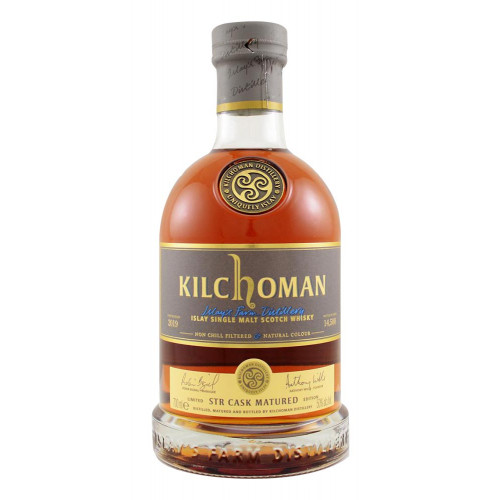 Kilchoman is a farm distillery on Islay, producing Scotland’s only single farm single malt. When the distillery opened in 2005, it was the first distillery to be built on the island in over 124 years. Kilchoman is a family run company, established by Anthony Wills and his wife Kathy, who wanted to resurrect the grass roots tradition of farm distilling. The parish of Kilchoman is home to some of Islay’s most fertile ground, and the Wills grow 200 tons of barley on the 250 acres of fields surrounding the distillery each year. The whisky-making process starts with the harvest in early September, and the barley does not leave the distillery until it becomes whisky over 1130 days later, as the malting, distillation, maturation and bottling are all done on site.

Kilchoman is one of only 7 Scottish distilleries still practicing traditional floor malting, a labor-intense process most distilleries have been outsourcing since the arrival of commercial distilling. The malted barley has to be dried, and traditionally on Islay this is done with peat from the island’s many ocean-soaked peat bogs, imparting a maritime smoky character to the spirit once distilled. Kilchoman’s stills are the smallest on Islay and some of the smallest in Scotland, and their distinct size and shape along with the spirit still reflux bulb allow the distillers to make spirit of unmatched purity. The distillery’s single malt is matured in a combination of cask types sourced from around the world, with each barrel contributing a unique character and color to balance with Kilchoman’s classic peat smoke and floral sweetness.

Kilchoman STR Cask Matured is matured in red wine casks that had been shaved, toasted and re-charred, a process created by late Dr Jim Swan, a whisky consultant that was described as ‘the Einstein of whisky’. The shaving reduces some of the bolder flavors on the surface, producing a subtler red wine influence, while toasting and charring the casks over a fire fueled with oak chips from used staves breaks down unwanted chemical bonds, replacing them with sugars, and vanilla and spice notes. Balancing the influence from both the new and used oak creates a powerful combination of rich fruit, oak, spice and maritime peat smoke.

Summer fruits on the nose are accompanied by a hearty measure of cinnamon spice, toffee and gentle peat smoke. The palate starts with soft caramel notes, followed by layers of red berries, lemon tart and earthy peat smoke. The finish is long with a pronounced spice, and honey and caramel notes.