$147.99
Caskers Rewards members earn up to 7 store points back when buying this bottle.

Size750mL Proof118.4 (59.2% ABV)
This whisky was aged exclusively in ex-bourbon barrels, and is the first-ever cask strength release from Kilchoman.
Notify me when this product is back in stock.

Caskers Rewards Caskers Rewards members earn up to 7 store points back when buying this bottle. Learn more
Out of stock
Skip to the end of the images gallery 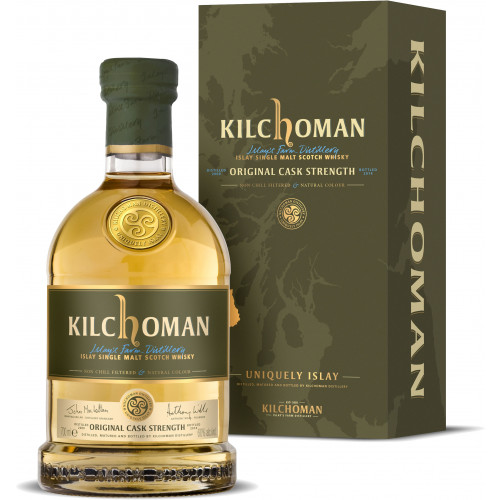 Kilchoman Single Malt Scotch Whisky is made from fresh barley, which is harvested and then malted at the distillery's malthouse (Kilchoman is one of just six distilleries in Scotland that continues to malt its own barley). Once the barley has been malted, it is dried over a peat flame for ten hours. This drying process contributes a smoky, iodine-like flavor to the whisky. After the barley has been dried, it is fermented for three to four days in stainless steel washbacks before being twice distilled through Kilchoman's two copper-pot stills.

It has always been my intention to release a cask strength expression once we had the stock available,” says Anthony Wills, managing director of Kilchoman. “This is the way single malt should be drunk. It allows everyone to experience Kilchoman with all the characteristics captured in the glass”.

Kilchoman Original Cask Strength Single Malt Scotch Whisky has a big, briny nose with notes of barley fields and fall harvest. The palate is slightly sweet, with notes of banana and marshmallow, and leads to a bold finish with tastes of black pepper and smoked ham.

Under 10,000 of these bottles were produced — make sure to pick one up today!

Big, briny nose with notes of barley fields and fall harvest. The palate is slightly sweet, with notes of banana and marshmallow, and leads to a bold finish with tastes of black pepper and smoked ham.