Size750mL Proof92 (46% ABV) each
Aged for approximately five years, Machir Bay was named "Whisky of the Year" at the International Whisky Competition in 2013.
Notify me when this product is back in stock. 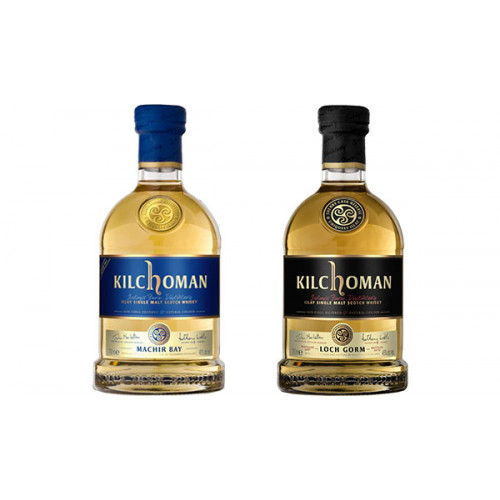 Kilchoman Single Malt Scotch Whisky is made from fresh barley, which is harvested and then malted at the distillery's malthouse (Kilchoman is one of just six distilleries in Scotland that continues to malt its own barley). Once the barley has been malted, it is dried over a peat flame for ten hours. This drying process — the barley is peated to approximately 20 phenol parts per million — contributes a smoky, iodine-like flavor to the whisky. After the barley has been dried, it is fermented for three to four days in stainless steel washbacks before being twice distilled through Kilchoman's copper-pot stills.

Kilchoman Machir Bay Islay Single Malt Scotch Whisky is crafted from a marriage of four and five year-old whiskies that have matured in American oak casks that were previously used to mature bourbon. Following its initial maturation, a portion of the whisky is double-barreled, or finished, for approximately one month in casks that were previously used to mature Oloroso Sherry. "We practice a very strict wood policy regime at Kilchoman, which is crucial in our ability to produce such a high-quality young single malt," says Wills. As a result, the whisky has a peaty aroma with touches of salty tang and citrus. The aroma gives way to notes of vanilla, coconuts, papaya and malt on the palate, which are balanced by hints of cinnamon and baking spices. The finish is peaty and fresh, with a long, lingering touch of vanilla and caramel.

Kilchoman Loch Gorm Single Malt Scotch Whisky is aged for five years in casks that were previously used to mature Oloroso sherry. As a result, the whisky is slightly fruitier than Machir Bay, with an aroma of spices and soft peat. Notes of sweet fruits, bananas and pears dominate the palate, and are balanced by a subtle peaty undertone. The finish is long and clean, with a burst of citrus.

Machir Bay: Peaty aroma with touches of salty tang and citrus. Notes of vanilla, coconuts, papaya and malt on the palate, which are balanced by hints of cinnamon and baking spices. Finish is peaty and fresh, with a long, lingering touch of vanilla and caramel.