Size750mL Proof96.4 (48.2% ABV)
Confiscated delivers complex notes of honeysuckle, fresh citrus, toffee, and pie crust, with a kiss of cinnamon spice.
Notify me when this product is back in stock. 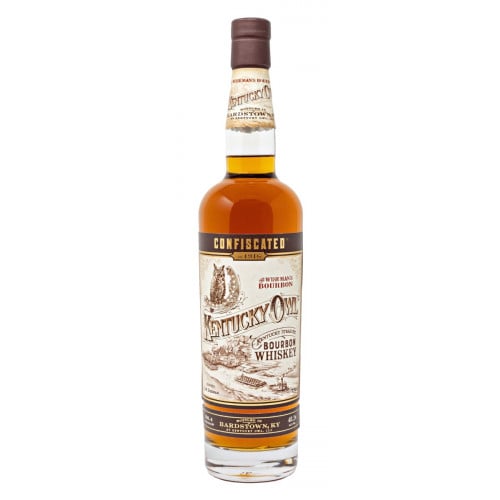 Currently Kentucky Owl is in the midst of designing a stunning state-of-the-art distillery park with rickhouses for aging, a bottling center, as well as a vintage dinner train to stop on the property. Kentucky Owl Park will be built at Cedar Creek Quarry in Bardstown. The 420-acre site will boast beautiful lakes with crystal clear, limestone-filtered water that will be used in our whiskey production. The Stoli Group has turned to the world-renowned Shigeru Ban Architects to oversee the project.

Bottled at 96.4 proof, Confiscated delivers notes of floral gardenia and honeysuckle, along with grape, red apple, orange cuties, wet banana bread and toasty sourdough bread crust on the nose. The palate is reminiscent of graham crackers, toffee, muted sweet cinnamon spice, and fresh-squeezed orange juice balanced with white grapes and finishing with a hint of cayenne.

Notes of floral gardenia and honeysuckle, along with grape, red apple, orange cuties, wet banana bread and toasty sourdough bread crust on the nose. The taste is reminiscent of graham crackers, toffee, muted sweet cinnamon spice, and fresh-squeezed orange juice balanced with white grapes and finishing with a hint of cayenne.

1.5 out of 5
(2 reviews)
Write a review
Real email address is required to social networks
Sign in
Login with Google
Login with Facebook
Or
We also recommend