Learn more
Size750mL Proof121 (60.50% ABV) *Please note that the ABV of this bottle may vary
This big and bold bourbon was released in 2018 with a total of 9,051 bottles produced. Bottled at 121 proof, the sweet, creamy, spicy, and rich bourbon was rated 92 points by Whisky Advocate.
Notify me when this product is back in stock. 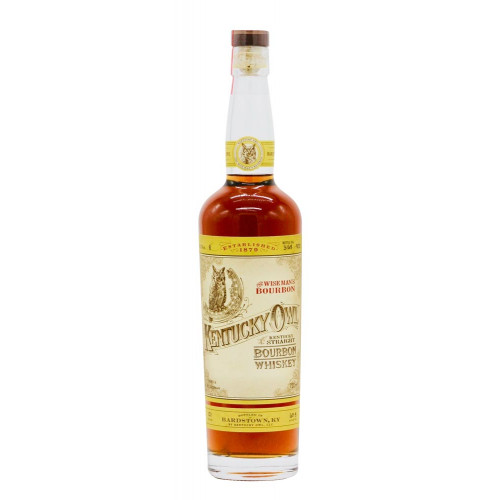 Kentucky Owl achieved much success and production continued until Prohibition halted distillation. The family-run facility was no match for the "forces of teetotalism, temperance and eventually, the Feds". In 1916, Prohibition left several local distilleries with ample reserves of bourbon. As for Kentucky Owl, approximately 250,000 gallons of bourbon were left over in various stages of aging. Today these reserves would be worth about $40 million in inventory. After Federal agents descended on the Dedman’s distillery, the bourbon was seized and shipped up the river by barge to the state capital in Frankfort for "safekeeping" in a warehouse.

Batch #8 of the flagship Kentucky Owl Straight Bourbon Whiskey is a big and bold expression with cinnamon, apple, caramel, vanilla notes. Released in July 2018, a total of 9,051 bottles of this 121-proof whiskey were produced. Crafted with spirits aged between 5 and 14 years, the sweet, creamy, and spicy bourbon was rated 92 points by Whisky Advocate in 2019.

Grab a bottle of this increasingly rare whiskey today!

The rich nose opens with apple, caramel, cinnamon, nutmeg, vanilla, red pepper, and cider aromas. On the palate, you'll find sweetness, creaminess, spice, and plenty of richness with the aromas from the nose translating beautifully. The finish is extra long with oak and cinnamon.