Size750mL Proof120.2 (60.1% ABV)
Kentucky Owl Straight Bourbon Whiskey Batch No.10 is the latest release from the cult Bardstown-based brand. This bourbon is a blend of the company’s oldest and most precious barrels combined with more youthful, fruity and spice-driven selections, bottled at barrel proof, uncut and unfiltered. 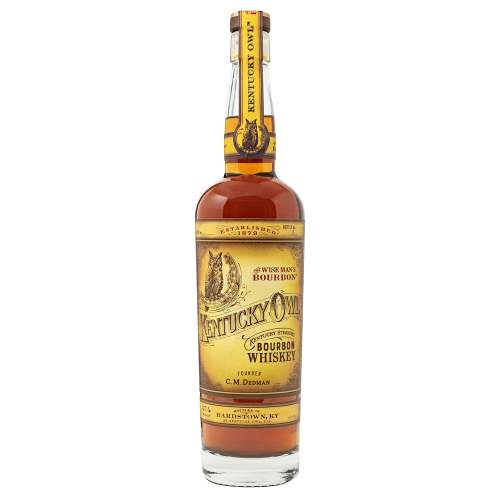 Kentucky Owl was founded in 1879 by a local pharmacist, Charles Mortimer Dedman, after he and his new bride received some land on the banks of the Kentucky River as a wedding gift. Dedman decided to build a distillery and Kentucky Owl whiskey continued to flow until 1916, when Prohibition was looming and federal agents seized 250,000 gallons of whiskey that Kentucky Owl kept in its warehouses. They shipped the bourbon up the river to Frankfort for "safekeeping", and one night the warehouse holding this precious stock burned to the ground. However, rumors persist that the whiskey was actually spirited away by Al Capone. Whether the whiskey was destroyed in the fire or sold in Chicago speakeasies will remain a mystery. We do however know that C.M. Dedman never distilled another drop, and Kentucky Owl would be all but forgotten if it wasn’t for C.M.’s great-great grandson Dixon Dedman.

Dixon grew up in his family's Beaumont Inn, listening to the story of his great-great grandfather's rise and fall in the bourbon business. When he took over the family business in early 2000s, he started dreaming of bringing back Kentucky Owl. The first batch of Kentucky Owl took six years to make. After getting a hold of some of the best barrels of bourbon in Kentucky with the help of family friends and kind distillers, Dixon started sampling the barrels and combined them in different ways, looking for the right blend. He worked hard to recreate a new, small batch Kentucky Owl, and make something C.M. Dedman would be proud to put the family name on. Kentucky Owl has since released over a dozen expressions to great acclaim. The brand is now part of the portfolio of Stoli Group, which is owned by the Luxembourg-based SPI Group, with Dixon staying on as the master blender. The Kentucky Owl park is being developed in the Cedar Creek Quarry in Bardstown, which will feature a state-of-the-art distillery, along with rick houses for aging and a bottling center, as well as a visitor center.

Kentucky Owl’s latest edition, Bourbon Batch No. 10, is a blend of the company’s oldest, oakiest and most precious barrels combined with more youthful, fruity and spice-driven selections. Made from some of the finest bourbon in Kentucky, this expression is bottled at barrel proof, uncut and unfiltered.

This whiskey offers flavors of sweet caramel, toffee and vanilla, followed by subtle floral fruity notes before finishing with a kick of spice on the back of the palate.