This product is available in: CA, MN, NY, ND Unfortunately, we can't ship to PO Boxes and APO addresses.

Size700mL Proof86 (43% ABV)
Acclaimed Irish Master Distiller Brian Nation has teamed up with the brothers at the O'Shaughnessy Distillery to bring you this blend of 3 sourced whiskeys while their own whiskey matures. An Irish grain whiskey and an Irish pot still whiskey are joined by an American rye in this 4-year-old blend.

This product is available in: CA, MN, NY, ND Unfortunately, we can't ship to PO Boxes and APO addresses. 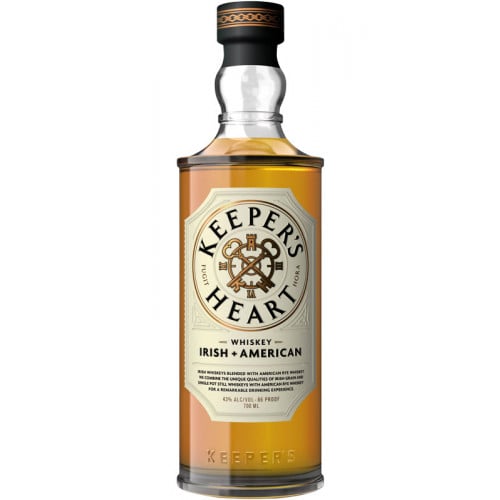 Patrick and Michael O'Shaughnessy are cousins and lifelong friends. While the two were sharing a bottle of whiskey with Michael's father Gerry at the end of a family reunion, they started talking about the importance of family and ways to keep their ties even for future generations. They found their answer in their glasses ― a whiskey that would celebrate their Irish-American heritage.

The cousins traveled to Ireland and contacted acclaimed Master Distiller Brian Nation, who worked at Jameson, Redbreast, Middleton Very Rare, and other prominent whiskey brands. The group formed an immediate connection, developing a vision of a whiskey that would bridge the gap between Irish and American whiskey. O'Shaughnessy distillery was launched in their hometown of Minneapolis in an old potato factory and 3 copper pot stills were brought in.

After the malted and unmalted barley is milled, the mash is created and filtered through a Lauter Tun. The resulting wort is fermented with the help of dried yeast. Then, the wash is triple-distilled in 3 separate copper pot stills, with only the heart of the distillate making it into the product. Finally, the new whiskey is matured for at least 2 years in American virgin oak and various other casks such as sherry, Malaga, and refill bourbon casks.

While their own spirit is maturing, they have released Keeper's Heart Irish + American Whiskey, a blend of 3 whiskeys: a smooth and delicate Irish grain whiskey, a rich and complex Irish pot still whiskey, and a spicy and bold American rye, all of them 86-proof and 4 years of age. The whiskey has won a Gold Medal at the 2022 edition of the San Francisco World Spirits Competition.

The nose of this light-amber whiskey is bright with floral, cinnamon, and clove aromas. Look for biscuits, brown sugar, cooked fruit, vanilla, citrus zest, and ginger on the pleasantly sweet palate. The finish is long and sweet with spice, caramel, and charred oak lingering