Size750mL Proof90 (45% ABV)
This wheat heavy bourbon is produced grain-to-bottle, certified organic and kosher. Aged in newly-charred American oak casks, proofed using unfiltered water from an underground aquifer in Three Oaks, MI and hand-labeled/bottled at 90 proof.
Notify me when this product is back in stock. 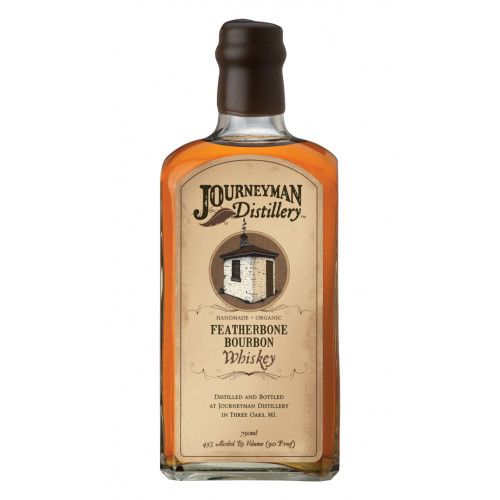 Featherbone Bourbon is made by distilling a mash of 70 percent organic corn, 25 percent organic wheat and 5 perfect organic rye through a 5000-liter, copper pot still imported from Germany. Welter sources the corn and rye from a farmer in Illinois, and the wheat from a local farmer in Michigan. The grains are produced without the use of synthetic fertilizers, artificial pesticides, herbicides, antibiotics, growth hormones, feed additives, or genetically modified organisms and enable Journeyman Distillery — and all of its products — to be certified organic by the Midwest Organic Services Association.

Following distillation, the bourbon ages to profile in newly charred American oak casks. Using multiple size barrels, each distillation is tailored to the barrel it will age in and bottled once it has reached the desired taste profile. Journeyman Featherbone Bourbon is bold, assertive and youthful, with earthy flavors, nutty notes, spirituous, cereal notes, peanut butter, sweet, caramel, vegetal qualities - warming on the palate.

Light chestnut color. Aromas of vanilla and caramel, along with some citrus and cracked black pepper. Malted cereal and whipped cream notes on the palate, which lead to a bright, textured finish complete with cherry and tobacco.