This product is available in: CT, DC, IL, MI Unfortunately, we can't ship to PO Boxes and APO addresses.

Size750mL Proof100.7 (50.35% ABV)
A blend of their 11 and 18-year-old whiskeys, this expression is finished in Armagnac brandy casks that impart a rich fruitiness to the bourbon. It has won a Double Gold Medal at the San Francisco World Spirits Competition in 2 consecutive years.
Notify me when this product is back in stock.

This product is available in: CT, DC, IL, MI Unfortunately, we can't ship to PO Boxes and APO addresses. 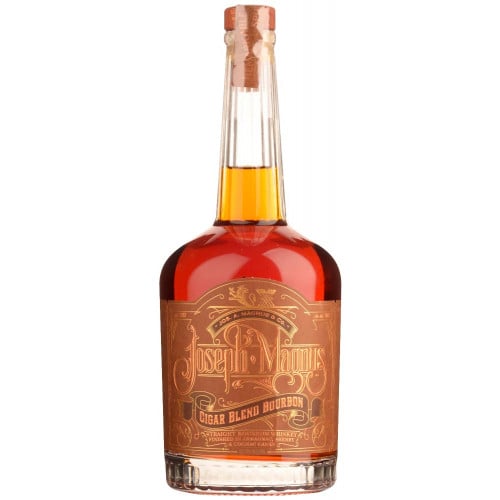 The art of finishing and blending bourbon across the three casks imparts distinctive notes to the finished spirit. This inspired bourbon has rich and deep notes of vanilla, citrus, dark chocolate, brown sugar, and dark stone fruits which deliver a lingering, warm finish. Joseph Magnus Bourbon has received numerous accolades at the highest levels of competition: Double Gold in 2016 and 2017 in both San Francisco World Spirits Competition and New York World Wine & Spirits Competition and Gold Medal, Best in Class Whiskey 2016 at ADI, to name a few.

The Cigar Blend Bourbon expression combines the 11 and 18-year-old whiskeys that are masterfully blended to pair exceptionally well with cigars. The bold bourbon is bottled at 100.7 proof and has notes of tobacco, spice, vanilla, fig, prunes, and dried fruit. Finished in Armagnac brandy casks imparts the liquid with its fruity notes, elevating the liquid to another level of fruity richness. This expression has won a Double Gold Medal at the San Francisco World Spirits Competition in 2018 and 2019.

This bold and rich bourbon opens with tobacco, spice, leather, vanilla, toffee, and plenty of dried fruit notes, as well as some sweetness and oak. Vanilla, toffee, and caramel are on the palate, along with dark fruit and spice. Finishes oaky, spicy, and fruity.