Size750mL Proof80 (40% ABV)
The Johnnie Walker Blue Label Year of the Ox limited edition celebrates the Lunar New Year with a bottle design by award-winning Chinese artist Shirley Gong. This premium Scotch whisky was blended by picking only 1 in 10,000 casks from the company’s reserves, including some irreplaceable casks from long-closed distilleries.
Notify me when this product is back in stock. 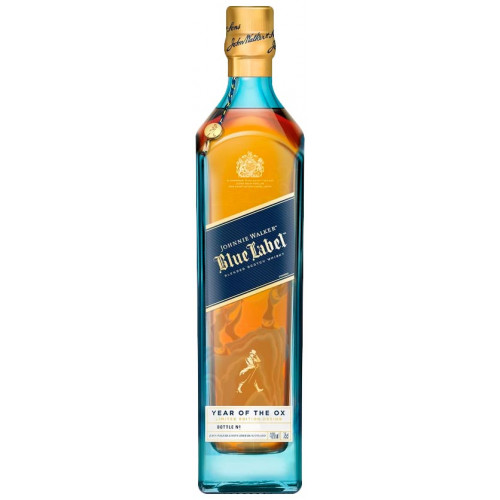 Johnnie Walker, one of the most widely distributed brands of blended Scotch whisky in the world, originated in the Scottish burgh of Kilmarnock in East Ayrshire. The story of the brand starts with John Walker, who started a profitable groceries business with the inheritance from his father. John Walker, himself a teetotaler, found his competitive edge in whiskies he blended himself, offering his customers a consistent product, unlike most other grocers, who usually sold a line of single malts that were never all that consistent. Whisky represented about eight percent of the sales when John’s son Alexander Walker took over the business after his father’s death in 1857, and when the company was passed on to the third generation, this share was already between 90 and 95 percent. The legalization of the blending of grain and malt whiskies by the Spirits Act of 1860 marked the beginning of the modern blended Scotch whisky. Johnnie Walker's first commercial blend, called Old Highland Whisky, was launched in 1867. Alexander Walker also introduced the brand's signature square bottle, and the distinctive slanted label. In 1893, the Walkers acquired the Cardhu distillery, and kept expanding through the early 20th century by buying interests in a number of distilleries. This ensured the company a steady supply of whiskies for its blends. By 1909, John's grandsons George and Alexander II had expanded the line, and sold three blended whiskies.

This limited edition of Johnnie Walker Blue Label from the Zodiac Collection celebrates the Lunar New Year with a bottle design that has been intricately illustrated by award-winning Chinese artist Shirley Gong. 2021 is the Year of the Ox, which is the symbol of wealth, prosperity, diligence, and perseverance. Johnnie Walker Blue Label is a premium Scotch whisky. Only 1 in 10,000 casks from the company’s reserves of over 10 million maturing whiskies have what it takes to be blended into this masterpiece, including some irreplaceable casks from long-closed "ghost" distilleries.

The nose is fruity, with a touch of oak, cedar and spice. The supple and balanced palate has notes of dried fruits, honey, sweet spice, and hints of smoke. The finish is smoky, floral, and oaky, with aromas of dried fruit, spice, and honey.