Learn more
Size750mL Proof96 (48% ABV)
Aged for 18 years, this whisky earned a score of 95 points from the Beverage Testing Institute.
Notify me when this product is back in stock. 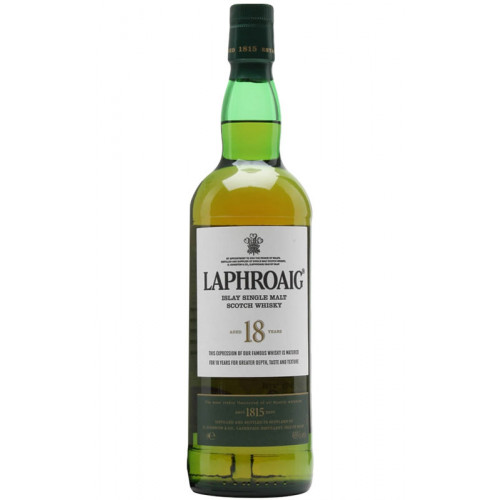 Situated on the southern coast of Islay, Laphroaig (pronounced La-froyg) Distillery was founded nearly two centuries ago by Donald and Alexander Johnston. The distillery derives its name from the ancient Gaelic word "lag"(meaning hollow) and the ancient Norse word "vik"(meaning bay), which refers to its location on the shores of Loch Laphroaig.

Laphroaig Single Malt Whisky is one of the most flavorful and intense whiskies made anywhere in the world. During Prohibition, it was one of the few whiskies still legally imported into the United States, as it was considered a medicinal spirit. Laphroaig Single Malt is made from the finest Scottish barley, which is then malted at the distillery and smoked over a peat flame. Unlike other distilleries which source peat from the Scottish mainland, the peat used to smoke Laphroaig barley is made of from the heather, mosses and lichens of Islay and adds a distinct iodine-like flavor to the whisky.

Laphroaig 18 Year Old Single Malt Whisky is aged for 18 years in the distillery's warehouses, which are situated along the shores of Loch Laphroaig. As a result, the whisky is imbued with a slightly salty tang that compliment its notes of oaky sweetness, dried citrus and peat. Following maturation, the whisky is bottled without the use of chill filtration.

Laphroaig 18 Year Old Single Malt Scotch Whisky is made in limited quantities each year. The whisky earned the Double Gold Medal at the San Francisco World Spirits Competition in 2011 and 2012, and earned a score of 95 points from the Beverage Testing Institute.