$343.99
Caskers Rewards members earn up to 17 store points back when buying this bottle.

Size750mL Proof102.4 (51.2% ABV)
The Macallan Classic Cut 2018 Edition is the second in a series of limited releases of the classic Macallan single malt from hand-selected Sherry-seasoned oak casks — bottled at 51.2% ABV. It’s a powerful, full-throated expression of their signature style.
Notify me when this product is back in stock.

Caskers Rewards Caskers Rewards members earn up to 17 store points back when buying this bottle. Learn more
Out of stock
Skip to the end of the images gallery 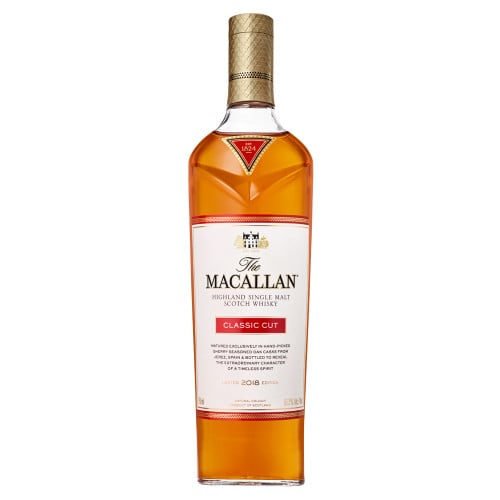 Each year, The Macallan released a limited annual edition of The Macallan Classic Cut. Each edition is the work of a different Whisky Maker. The second edition in the series, The Macallan Classic Cut 2018 Edition was created by Ian Morrison who used a small selection of Sherry-seasoned oak casks, specially selected for their distinctive character. Classic Cut 2018 Edition was bottled at a higher proof of 51.2% to showcase the true flavor complexity of the whisky and deliver a richer, fuller taste experience bursting with notes of orange, vanilla and gingerbread.

Bright notes of citrus fill the air with fresh cut oak and baking spices. On the tongue, more spices — ginger and nutmeg — interplay with vanilla, gingerbread and orange zest before a long, oaky finish.