Size750mL Proof86 (43% ABV)
This expression from the Purveyor's Series is a bourbon that is aged in new American oak barrels. A unique method of finishing is employed, where toasted American white oak chips are added into the barrel, imparting the balanced bourbon with an extra layer of oakiness.
Notify me when this product is back in stock. 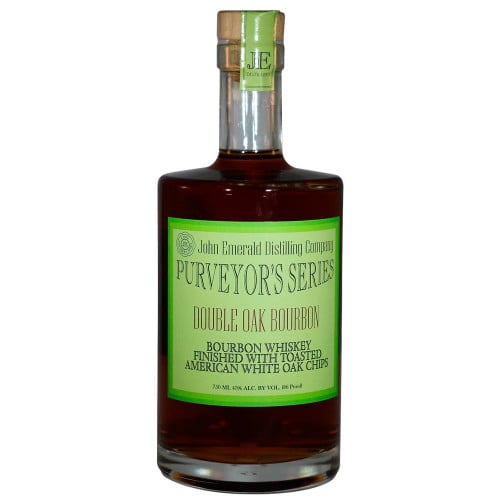 John Emerald Distilling Company is a family-run small-batch craft distillery from Opelika, Alabama that has been operational since 2014. It is the first legal distillery that opened in the state since the end of the Prohibition era, a year short of a hundred years later. It all started when John and his son Jimmy Sharp, both homebrewers, started looking into opening a brewery. Finding the market to be oversaturated, they turned to craft distilling instead and started rigorous training and education. They came upon an old cotton warehouse in Opelika, a small and business-friendly town where the mayor welcomed them with open arms.

The distillery now operates on 8 thousand square feet and has a tasting room that is open for visitors. They produce several spirits using their 350-gallon hybrid pot, each product named after one of John's and Jimmy's ancestors ― their (grand) father John Emerald Sharp, a successful businessman, being the distillery's namesake. The spirits include award-winning gin, vodka, rum, and a single malt. The latter — John Emerald Alabama Single Malt Whiskey — is at the very core of their lineup and is the only one to share the name with the distillery itself. Then there's Hugh Wesley's Gin, Elizabeth Vodka, Spurgeon's Barrel Aged Rum, and Gene's Spiced Rum.

This expression in John Emerald's Purveyor's Series Double Wood is a bourbon whiskey that is aged in new American oak barrels. But there's a twist, the barrels are filled with wood chips. In this case, toasted American white oak chips are used. The unique way of finishing the whiskey ensures that an extraordinary amount of liquid comes into contact with the wood, imparting the nicely-balanced sweet bourbon with an extra layer of oakiness.

It's a balanced profile with plenty of oakiness from the Double Oak finishing. The nose opens with leather and sandalwood notes. There's a pleasant sweetness on the palate, along with corn and caramel. Finishes super-oaky and tannic.