Size750mL Proof108 (54% ABV) - May vary
A cask strength of 108 proof version of the Jim Beam Single Barrel. Only the top 1% of barrels are hand-selected for Single Barrel expressions.
Notify me when this product is back in stock. 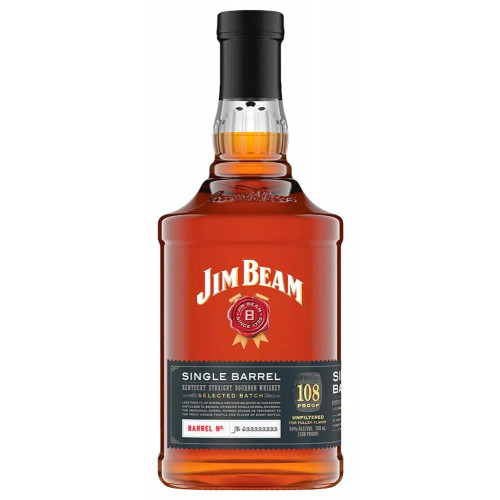 In 2019, a new, 108 proof version of the Jim Beam Single Barrel was released. Single barrel expressions represent the top 1% of all barrels as bourbon barrels are influenced by a variety of factors, such as placement in the rack house, seasonal changes and the length of aging. In less than 1% of barrels these circumstances come together and the perfect bourbon comes to life. For Jim Beam Single Barrel, these special barrels are hand-selected by expert distillers and each one has its own, unique taste profile. This outstanding bourbon represents that individuality. Not chill filtered, its rich vanilla notes on the nose and a well balanced palate of oak and caramel as well as bottling at cask strength bring forward a true, unaltered bourbon.

The nose greets you with rich notes of oaky vanilla and a tad of spiciness. The palate is balanced with flavors of oak, vanilla and caramel. The finish is long.