This product is available in: IL, KY, MO Unfortunately, we can't ship to PO Boxes and APO addresses.

This product is available in: IL, KY, MO Unfortunately, we can't ship to PO Boxes and APO addresses. 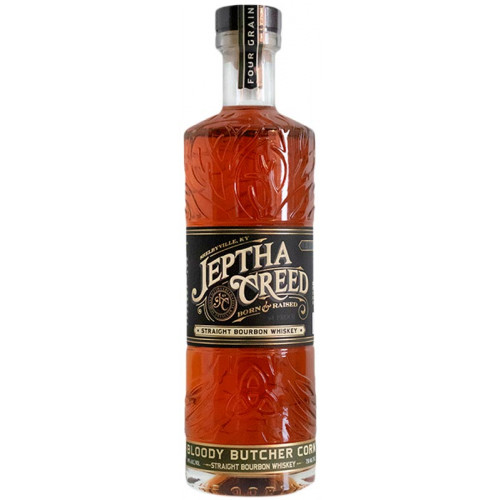 Bruce and Joyce Nethery had a longtime dream of starting their own business, a legacy they could create for their children. With a background in farming and chemical engineering, as well as their location in the middle of bourbon country, the solution was obvious. Thus they set upon the path of setting up a distillery in 2013. After several years of testing, tasting, and construction which even included a bridge, their operation was finally ready to launch in 2016 when the Jeptha Creed Distillery opened its doors.

Starting with an original vodka and moonshine, as well as flavored honey and lemonade variants, the business immediately took off and expansion started. They soon added several vodka (apple, blueberry, coffee, hot pepper) and moonshine (cinnamon, blackberry, apple pie) flavors. They then set their sights on whiskey, crafting 3 experimental expressions before launching their Straight Four-Grain Bourbon in 2019. Then there was a brandy and hand sanitizer, a sign of the times. The distillery has become a popular tourist destination with a café, bar, and gift shop, offering tasting of their ground-to-glass products. What does the latter mean? Their own farm-grown or locally-sourced natural ingredients, of course. They grow their own Bloody Butcher corn right there on their 64-acre farm that is now run by the mother-and-daughter duo of Joyce and Autumn Nethery.

It was in 2016 that the distillery distilled the first legal bourbon in Shelby County since Prohibition. Today they produce 9 barrels per day, their Four Grain Straight Bourbon consisting of 70% Bloody Butcher corn, 15% malted rye, 10% malted wheat, and 5% malted barley. 6 years in the making, their ground-to-glass bourbon is bottled at 98 proof.

It's a sweet nose with cream, candy, floral, dried fruit, berries, cake, brown sugar, and blackberry jam notes. Complex and rich, there are vanilla, nutmeg, clove, and toasted pecan on the palate. Finishes long with vanilla, mint, and baking spices.