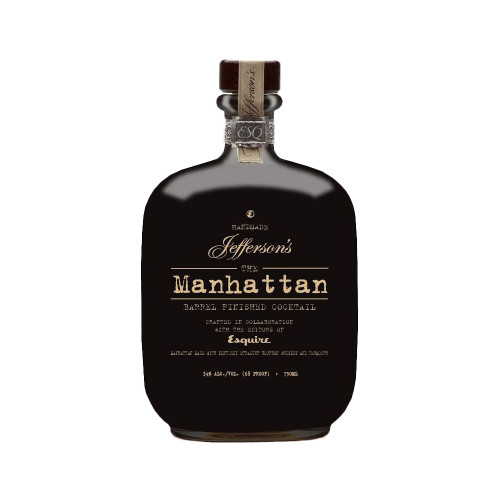 Jefferson’s The Manhattan Barrel Finished Cocktail was developed by Jefferson’s founder Trey Zoeller in partnership with David Granger, Editor-in-Chief of Esquire. The pair spent two years and dozens of attempts honing in on the perfect recipe, which they ultimately found by mixing Jefferson’s Bourbon that was aged in Kentucky, dry and sweet vermouth and barrel-aged spiced cherry bitters. The bourbon started at 125 proof and was refined to 82 proof — and once mixed with the vermouth and bitters, the resulting liquid is aged for an additional 4 months in ex-bourbon oak barrels before being bottled at 68 proof. Just pour, chill, and serve.

As a result of this unique barrel-aging process, Jefferson’s The Manhattan Barrel Finished Cocktail has a ripe aroma of Madeira wine and vanilla extract, which leads to a sharp palate filled with bitter herbs, vermouth, and citrus. The finish is clean and lengthy, with soft notes of licorice, oak, and root vegetables making the final statement.

Ripe aroma of Madeira wine and vanilla extract, which leads to a sharp palate filled with bitter herbs, vermouth and citrus. The finish is clean and lengthy, with soft notes of licorice, oak and root vegetables making the final statement.