Learn more
Size750mL Proof74 (37% ABV)
The 36th Vote Barreled Manhattan commemorates Utah’s role as the deciding vote to end Prohibition. The Manhattan is made by blending High West’s Double Rye Whiskey with Vya Sweet Vermouth and Angostura bitters. Once the ingredients have been blended together, they are barrel-aged for 120 days in casks that were previously used to mature rye whiskey.
Notify me when this product is back in stock.

This product is available in: CO, IL, MI, MO, NY Unfortunately, we can't ship to PO Boxes and APO addresses. 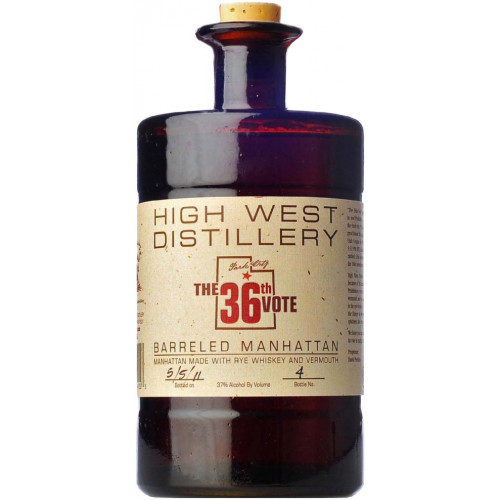 Situated at the bottom of the Quitting Time Ski Run in Park City, High West Distillery & Saloon is the first distillery in Utah since Prohibition and the only ski-in gastro-distillery in the world. "We wanted to call High West a "saloon", says David Perkins, High West's founder, "because we wanted to pay homage to the history of saloons in the old West and the important role they played in each and every town that had one. The saloon was the main meeting place where town hall was held, important announcements were made, and people went to eat and drink. We want people to share that sense of community and friendship over High West."

The 36th Vote Barreled Manhattan is made by blending High West's Double Rye Whiskey (the rye is aged for up to 16 years) with Vya Sweet Vermouth and Angostura bitters. Once the ingredients have been blended together, they are barrel-aged for 120 days in casks that were previously used to mature rye whiskey. The barrel-aging process oxidizes the cocktail, allowing the vermouth and bitters to mellow, and contributes a touch of woody spice to the drink.

The 36th Vote Barreled Manhattan has soft, harmonious notes of woody spices that mingle well with its backbone of rye and vermouth. As notes of baking spices, oak, cinnamon and black pepper fade, hints of sweet cherries, dried fruits and milk chocolate appear and lead to an elegant, smooth finish.

Barreled Manhattan wood notes play extremelly well with rye whiskey on the palate. Notes of wood flavors gently balance the drink towards rye spiciness over the Vermouth sweetness. Finish is quite long, certainly above the average with spice and oak left on the palate.