Size750mL Proof90.2 Proof (45.1% ABV)
Made in homage to Thomas Jefferson, this bourbon earned a score of 94 points from the Beverage Testing Institute. 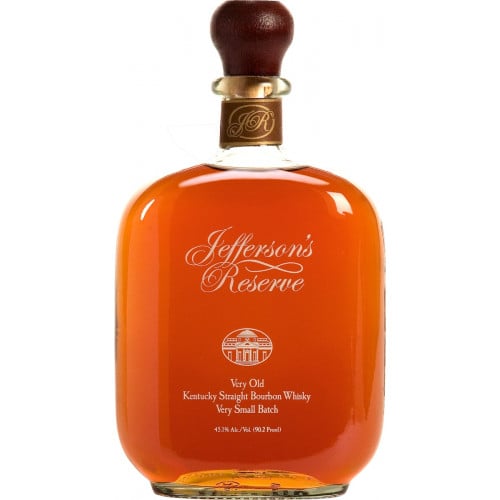 The principal author of the Declaration of Independence and one of the most illustrious founding fathers, Thomas Jefferson was elected the third President of the United States in 1800. During his tenure as President, Jefferson authorized the purchase of the Louisiana Territory, dispatched Lewis and Clark westward in order to explore the remainder of the continent and repealed the Whisky Excise Tax.

After Jefferson retired from public office in 1815, he often tended to the garden that he had cultivated at his Monticello estate. At the time, it was customary for wealthy farmers, including Jefferson, to make their own garden spirits. Each farmer's spirits were unique and reflected their personal tastes and the local terroir of their farm. Jefferson's Reserve Very Old Straight Bourbon Whiskey is crafted by Chet and Trey Zoeller in honor of Jefferson and his experimental nature. While the Zoellers were inspired by Jefferson, their own roots can be traced back for generations deep into Kentucky's bourbon history.

Jefferson's Reserve Very Old Bourbon is a complex blend of three unique bourbons — each made from a mash of corn, rye and malted barley — that are aged for up to twenty years and brought to proof with Kentucky limestone water. While most small batch bourbons are made from a blend of 200 to 300 different casks, each batch of Jefferson's Reserve is crafted from only 8 to 12 casks, causing the Zoellers to label their bottling process as "ridiculously small batch." The difference, Zoeller says, is like "making dinner for eight guests instead of eighty. You are able to deliver a great product that has the nuances you are striving for."

Like Jefferson himself, Jefferson's Reserve Bourbon is complex, elegant and sophisticated. It has an aroma of gentle, creamy vanilla, soft spices and dried fruits that open up to notes of toffee, roasted corn and tobacco, before leading to a lingering, dry finish. Jefferson's Reserve earned a score of 94 points from the Beverage Testing Institute and the Gold Medal at the San Francisco World Spirits Competition.

"Jefferson's is a handmade product that I put my name on, which makes it hugely important," says Zoeller.