Learn more
Size750mL Proof90 (45% ABV) *Please note that the ABV of this bottle may vary
This globe-trotting bourbon has spent a part of its maturation on Ocearch's ship, hopping between continents and working to save our oceans. Find out how the extreme temperature fluctuations and sea breeze affect the process.
Notify me when this product is back in stock. 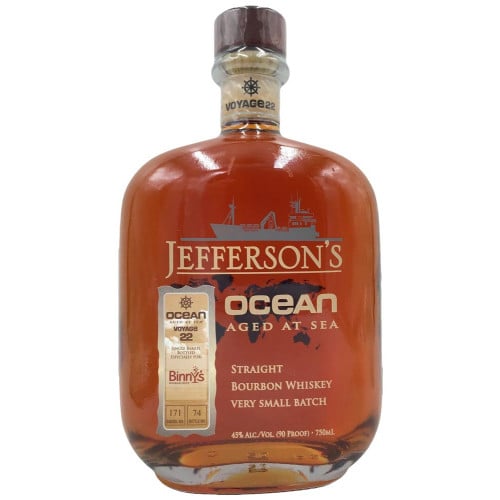 But the Ocean lineup is extra special in that it experiments with how maturing aboard a ship affects a spirit. The vessel in question is Ocearch's flagship, and this is the 22nd bourbon that has traveled the world aboard it. The bourbon uses wheat in its mash bill as its small grain instead of the typical rye. The lighter wheat allows the sweetness of the corn to build through the maturation process. Once barreled and allowed to mature on land, it was put to sea, where it was immediately and continually influenced by the salt air and constant movement of the ship.

Crossing the equator, the liquid was exposed to extreme changes in temperature as the ship transitioned from winter to summer and vice versa without the buffer of spring and fall. Extreme heat caused the sugars of the corn to caramelize in the wood and work their way into the bourbon as the wood contracted with the extreme drop in temperature. Without having to compete with the spice of the rye, the bourbon of OCEAN Voyage 22 took on a great deal of vanilla and salted caramel corn as its dominant flavor with a subtle wood finish.

Dominant vanilla and salted caramel corn notes are followed by dried fruit and a touch of brine. It all culminates in a smooth and subtle woody finish with caramel and minty undertones.