We're showing you items that ship to MT.

This product is available in: DC, IL, MN, NY, TX Unfortunately, we can't ship to PO Boxes and APO addresses.

Size750mL Proof90 (45% ABV)
The idea for the Jefferson's Ocean line came to Trey Zoeller while holding a bottle on a friend's boat, watching the bourbon rock gently against the glass. The result was a collection of savory-tasting dark bourbons, aged beyond their years on OCEARCH ships while circling the globe. This bottle was aged at Sea Voyage 23.
Notify me when this product is back in stock.

This product is available in: DC, IL, MN, NY, TX Unfortunately, we can't ship to PO Boxes and APO addresses. 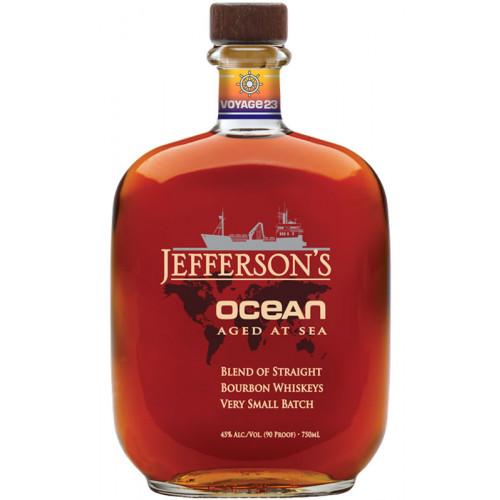 Founded in 1997 by Trey Zoeller and his father Chet, a famous bourbon historian, Jefferson's Bourbon began as a family affair. Producing spirits was in their blood, since as early as in 1799, Trey's 8th generation grandmother was actually arrested for the production and sales of spirits at a time when it was prohibited by law. Today, more than two centuries, Trey Zoeller continues to push the boundaries of bourbon with his curious mindset, while upholding this rich tradition.

His taste for experimentation is evident in the Ocean line, for a boat is not a very common place for ageing spirits. The idea crossed Trey Zoeller’s mind while he was holding a bottle of Jefferson’s Reserve on the deck of his friend’s boat. As he watched the bourbon rock gently against the glass, he thought to himself how bourbon would age on a ship, subjected to constant movement and extreme weather changes. In 2012, the first barrels began their journey around the world on OCEARCH’s flagship, a non-profit organization studying marine species. The result was a collection of dark bourbons of savory taste, aged beyond their years due to the constant movement and sugars caramelizing in the wood.

The journey of Jefferson’s Ocean Aged at Sea Voyage 23 was a quiet and reflective one. Beginning its voyage at high noon under the clear skies of Savannah, Georgia, quickly crossing the Panama Canal and then dropping below the equator, it was a solitary and calm journey, with unusually few other ships in sight. The bourbon was allowed to rest, taking on the character of the sea and the wood of the barrels that cradled it. With time, it transformed into an exceptionally smooth, buttery and smokey tasting bourbon. This was no ordinary journey and it amounted in no ordinary bourbon.

Grab your bottle of bourbon, aged at sea!