Size750mL Proof90 (45% ABV)
This year's release of the seafaring bourbon is crafted with 7- and 8-year-old juices that are finished at sea. The barrels cross the equator 4 times aboard Ocearch's flagship with the sea air, gentle rocking, and extreme temperature changes contributing to the profile of each cask.
Notify me when this product is back in stock. 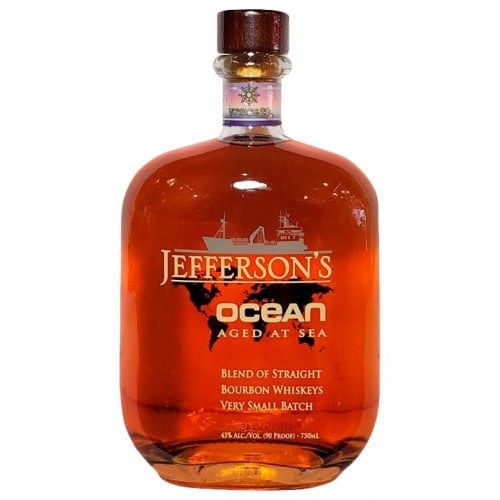 But the Ocean lineup is extra special in that it experiments with how maturing aboard a ship affects a spirit. The vessel in question is Ocearch's flagship, and this bourbon has traveled the world aboard that ship. The bourbon uses wheat in its mash bill as its small grain instead of the typical rye. The lighter wheat allows the sweetness of the corn to build through the maturation process. Once barreled and allowed to mature on land, it was put to sea, where it was immediately and continually influenced by the salt air and constant movement of the ship.

Typically crossing the equator 4 times, the liquid is exposed to extreme changes in temperature as the ship transitions from winter to summer and vice versa without the buffer of spring and fall. Extreme heat changes cause the sugars of the corn to caramelize in the wood and work their way into the bourbon as the wood contracts with the extreme drop in temperature. Crafted with 7- and 8-year-old bourbons, this year's release marks a departure from previous ones.

The nose of this deep-amber spirit opens with salted caramel, vanilla, and a dash of smoke. It's rich on the palate with toffee, brine, and charred oak notes. Finishes long with a lingering sweetness and a dash of citrus.