Learn more
Size750mL Proof112 (56% ABV) *Please note that the ABV of this bottle may vary
Coming from a collection of dark, savory bourbons aged on board of a ship, Jefferson’s Ocean Aged at Sea Cask Strength Voyage 21 experienced rough seas, resulting in more contact with the wood.
Notify me when this product is back in stock. 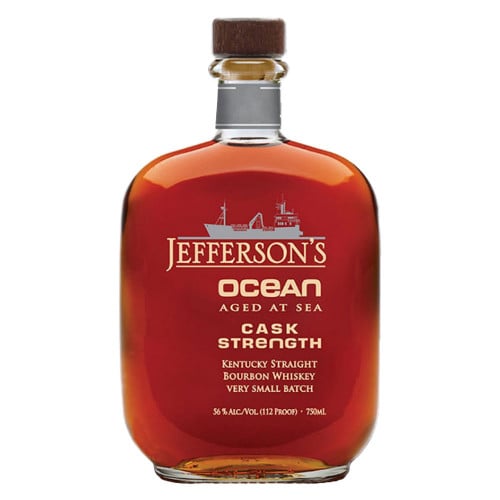 Founded in 1997 by Trey Zoeller and his father Chet, a famous bourbon historian, Jefferson's Bourbon began as a family affair. Producing spirits was in their blood, since as early as in 1799, Trey's 8th generation grandmother was actually arrested for the production and sales of spirits at a time when it was prohibited by law. Today, more than two centuries later, Trey Zoeller continues to push the boundaries of bourbon with his curious mindset, while upholding this rich tradition.

His taste for experimentation is evident in the Ocean line, for a boat is not a very common place for ageing spirits. The idea crossed Trey Zoeller’s mind while he was holding a bottle of Jefferson’s Reserve on the deck of his friend’s boat. As he watched the bourbon rock gently against the glass, he thought to himself how bourbon would age on a ship, subjected to constant movement and extreme weather changes. The result was the Ocean Voyage collection – a collection of dark bourbons of savory taste, aged beyond their years on board of a ship due to the constant movement and sugars caramelizing in the wood.

Jefferson’s Ocean Aged at Sea Cask Strength Voyage 21 experienced a rough voyage from Savannah to Manzanillo. Surviving hurricane season, rough seas, extreme temperature drops and numerous squalls before making it to its final destination. As a result, the bourbon had more contact with the wood and extracted more spices. Infused with smokiness from the barrel char and bottled at cask strength of 112 proof, this is a bourbon of the world with notes of cinnamon and orange zest mingling with salty caramel and passing to citrus on the finish.

Pick up your bottle of a bourbon that crossed the equator 4 times!

Burnt golden color. Aromas of cinnamon and orange zest. The palate is salty caramel and flavors of fig and baking spices. The finish is pleasantly long with a hint of citrus.